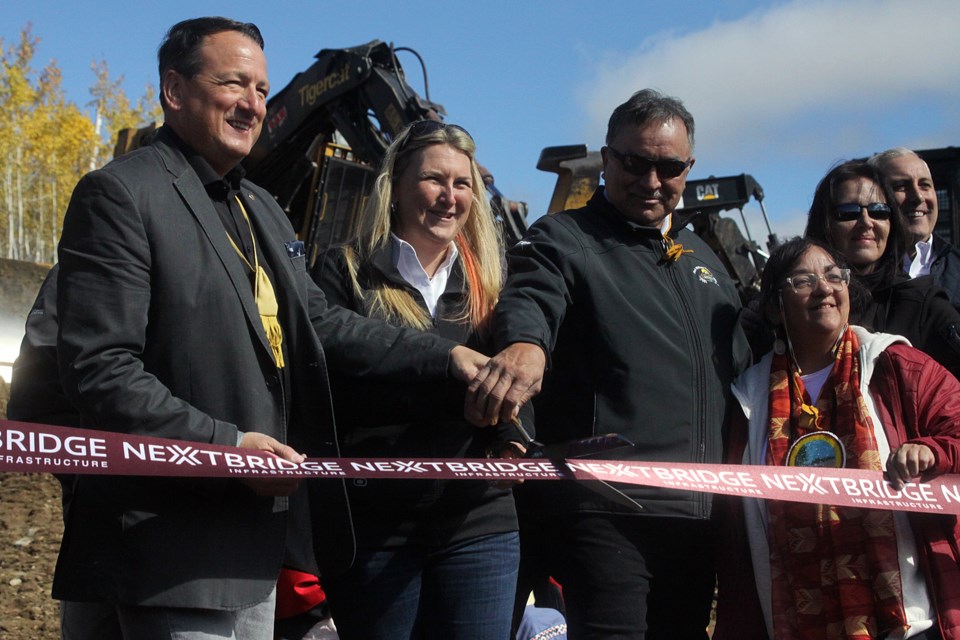 The official ground breaking for the East-West Tie, a 450-kilometre line connecting the Wawa and Lakehead transfer stations, was formally held on Wednesday just east of Thunder Bay.

NextBridge had been selected as the proponent to develop the project in 2013, but ballooning price estimates resulted in the process being reopened in 2018. Hydro One, which had initially been passed over, then submitted a new proposal claiming it could build a shorter line at a lesser cost, prompting the Ontario Energy Board to hold meetings late last year.

The project was finally given a jolt forward earlier this year when the Progressive Conservative government issued an order in council and ministerial directive to award the leave to construct to NextBridge.

NextBridge project director Jennifer Tidmarsh said it’s been a long road to finally get to the construction stage, with the project carrying not only short-term benefits through job creation and spin-off economic impact while the line is being built but also valuable, lasting infrastructure for the region.

“Long term for the northwest, it brings reliable power to the area,” Tidmarsh said. “It helps with economic development, with the mining industry, forestry industry. There’s now reliable power to power those opportunities.”

Construction of the line will be broken into 11 segments, with a targeted in-service date by the end of 2021.

During the development stages, the six Indigenous communities along the north shore of Lake Superior formed the Bamkushwada consortium, which gives them a 20 per cent equity stake in the project. The communities also created Supercom, an economic development entity to pursue contracting and training opportunities.

Fort William First Nation chief Peter Collins, who is also the president of Bamkushwada, said the ground breaking is an exciting day.

“We’ve put a lot of time and a lot of effort into getting this project where it is today,” Collins said.

“I think that’s the real goal of today – the positive outcome for our communities and the opportunities for all our contractors and our people to come to work here. There’s upwards of 600 jobs on this project when it gets into full speed and gets all the gear on the ground.”

Greg Rickford, the minister of energy, northern development and mines, described the project as a “win-win-win” for Northwestern Ontario and represents energy security, job creation and an opportunity for new economic enterprise along the corridor.

The partnership between the developers and Indigenous communities could serve as a path forward for future projects, the minister suggested.

“I think this is the template, if you will, for how to do things right, notwithstanding the fact that it took a little longer than it should have,” Rickford said.

“The communities stood their ground and they created an opportunity that I think will tell a story generations for now of how to do business the right way in this part of the country."