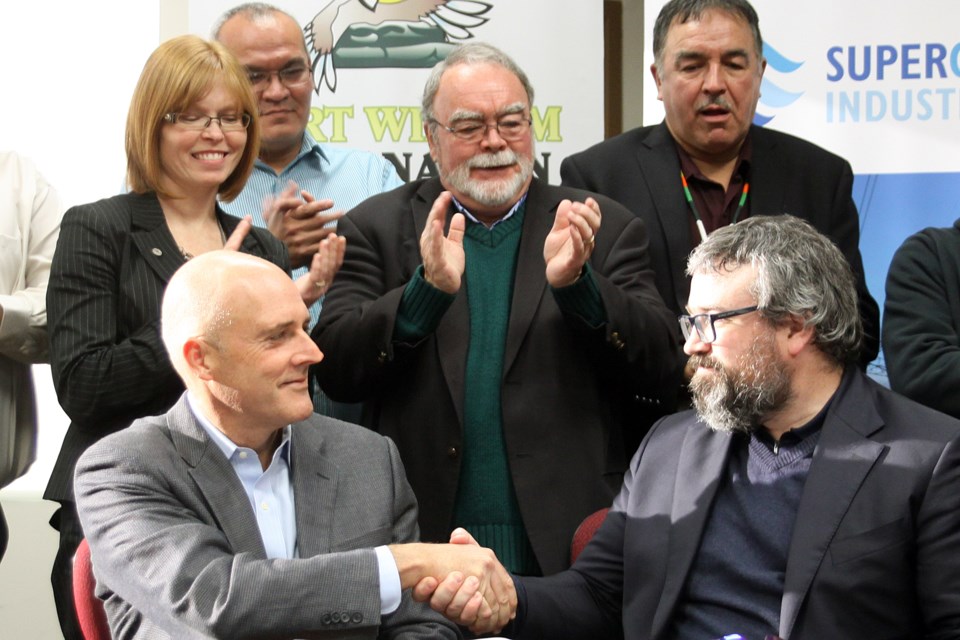 THUNDER BAY – A $777-million power transmission line project that has been more than four years in the making is one major step closer to fruition.

The East-West Tie transmission project, a 450-kilometre line that would connect the Lakehead and Wawa transformer stations, moved forward on Monday with the signing of an agreement between developer NextBridge Infrastructure and general contractor Valard.

Jennifer Tidmarsh, NextBridge’s project director, said a leave to construct application was filed with the Ontario Energy Board this July and approval could come next spring. That would put construction on target to have shovels in the ground in November 2018 with a goal of having the line in service in 2020.

“It’s key to ensure that we have partners in this project that are local and everyone sees economic growth from the partnership,” Tidmarsh said.

“Not only do we have the equity stake in the partnership, but also through Supercom the vehicle for allowing contracting and training and making sure each of these six communities receives benefits from this project.”

Matthew Dupuis, director of Supercom Industries and Red Rock Indian Band councillor, said an employment and training plan being developed in partnership with Confederation College is based on an intake of 244 people.

The potential for a significant number of jobs related to the line’s construction is expected to help bring back people who left four or five years ago after the collapse of the forestry sector, Dupuis said.

“This is creating long-term, sustainable employment in the region,” Dupuis said. “Even though this is a two-year build, there are so many spin-offs to different projects that are going to be starting right after it. This is an opportunity for everyone in the region to start a new career.”

Iain Angus, vice president of the Northwestern Ontario Municipal Association, said the potential economic benefits range from direct employment to small businesses that could provide services or supplies during construction as well as engineering firms and subcontractors.

“It’s just a massive project. It’s equivalent to one mine in terms of the impact,” Angus said. “It’s the start of the renewal of our economy for sure.”

The line, which would run generally parallel to the existing transmission line, would bring the electrical capacity to 650 megawatts. In addition to adding a redundancy, the new line provides essential access for future power projects planned across the region.

“In times where we have droughts we can bring power in from the northeast. In times we have a surplus we can ship it out to support southern Ontario and northeastern Ontario,” Angus said.

“It’s a win-win for the system but it also means we’re now guaranteed the power to feed Greenstone, Pickle Lake, Ear Falls, Red Lake, Sioux Lookout and the communities north of them. We can move large amounts of power in from the northeast into those areas.”

Fort William First Nation Chief Peter Collins said the jobs created from the line’s construction gives his community’s youth an opportunity to get training and be ready for the workforce.

“Yes, it’s a two-year window of opportunity but in those two years you can take on some real good skills and get some great, great opportunities,” Collins said. “That’s the motivation we’re trying to put behind the young people in our community. This is only a stepping stone.”