THUNDER BAY -- Sometimes a good idea is so obvious that no one thought to do it. That’s the way four Ontario schools, including Confederation College, view a new collaboration project for environmental and natural resources programs.
Nov 5, 2012 1:04 PM By: Jamie Smith 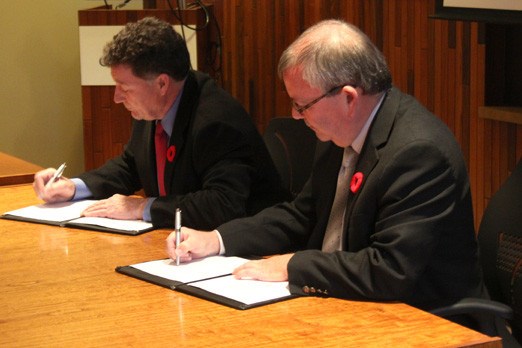 THUNDER BAY -- Sometimes a good idea is so obvious that no one thought to do it.

Confederation, Northern College, College Boreal and Fleming signed a memorandum of understanding Monday morning that will see the four schools share programming, curriculum and even students as graduates prepare for jobs in industries like mining and forestry.

Confederation College president Jim Madder points to mining, where up to 13,000 jobs are expected in the next five years, as a sector that has such high demands that one school by itself can’t meet them.

“I can’t right now produce enough graduates in environment and civil engineering and a whole variety of different areas,” Madder said after signing the understanding.

Colleges generally work independently from one another, and often compete for students.

In this case though, the schools will be able to learn from each other and develop and deliver one curriculum. That makes it easier for the schools but improves access to students as well Madder said.

“We can take the strength of each of the institutions and marry them,” he said. “It’s providing the access to people.”

While Fleming, in Peterborough, might not be near the growing industries in the North it does have a specialty in environmental and natural resource programs. Now a Confederation College student who wants to build on a one-year mining program has access to Fleming’s third year programs to continue skill-building.

“This partnership will give them exposure to possibilities,” Tilly said.