Count Thunder Bay Mayor-elect Keith Hobbs among a growing list of people who want the city to spare the life of a dog accused of killing a smaller dog at one of the city’s two off-leash dog parks.
Nov 19, 2010 4:14 PM By: Leith Dunick 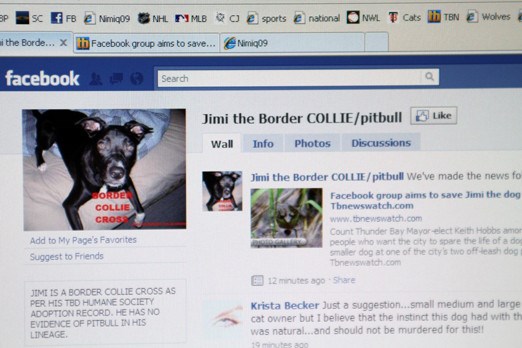 A Facebook group designed to save the life of a dog who killed another dog a a city off-leash park has more than 540 members as of Friday afternoon. (Leith Dunick, tbnewswatch.com)

Count Thunder Bay Mayor-elect Keith Hobbs among a growing list of people who want the city to spare the life of a dog accused of killing a smaller dog at one of the city’s two off-leash dog parks.

Hobbs on Friday said euthanizing Jimi, a border collie/pit bull cross, is not the answer.

“I don’t think that dog should be euthanized,” Hobbs said Friday morning, a day after joining the Facebook group “Jimi the Border Collie/Pit Bull,” effectively signing a petition calling on the city’s animal services department  to reconsider any destruction order it might levy.

“Dogs will be dogs and dogs are only as well-behaved as their owners. I think the dog has to be spared. I think it’s the right thing to do.”

The group, which was founded earlier in the week, already has more than 530 members as of Friday afternoon, which marks the 10th day Jimi has been quarantined.

The group's founder, who asked to remain anonymous, said it's sickening to think Jimi might be put down.

"I was not at the park the day of the incident, however I received an email from a witness who states the dogs were all playing together and Gus succumbed to injuries due to the shock of a hit, not external injuries. Nobody is denying that Jimi was on the wrong side, however there were several other large dogs on that side as well."

Jimi, adopted out by the Thunder Bay District Humane Society as a Border Collie cross, was taken from his owner by animal services after the Nov. 9 incident at the Winnipeg Street off-leash park.

The quarantine period ends at midnight on Friday.

The final decision on his fate lies with the courts. City bylaw enforcement officer Ron Bourret said two charges have been laid against the dog’s owner, one related to the attack and another for owning a pit bull.

The outcome of the charges will determine whether Jimi lives or dies, Bourret said.

“I feel for the owners of Gus. I would be heartbroken if my dog had died. But Jimi should not have to die. They should just implement a muzzle for Jimi when he is at the dog park. That way he can still play freely, but it would avoid any further incidents,” Moulson writes on the Facebook group’s wall.

“Killing Jimi won’t bring back Gus, but a little education, training and maybe a muzzle in public will prevent this from happening again. Jimi’s owner is obviously suffering too and you can tell he would do the right thing if given the chance. Please add my name to the list to support saving Jimi.”

Dave Guarasci says an accident like this could happen with just about any breed of dog.

“German shepherds are amazing family pets, however they have the highest bite stats in Ontario,” he writes. “Does that mean they should be put down? Not at all, it was an accident. I don’t understand who these people are to be able to decide that putting a dog down because of what happened.”

The Winnipeg Street dog park is divided into two sections, one for little dogs, shorter than 16 inches at the shoulder, and a smaller, less well-maintained side for larger dogs. There are strict rules that ban food and toys, but the park is entirely self-policed.

On the day in question, Jimi’s owner allowed the dog into the small-animal side of the park.

Hobbs, a former police officer, said the common-sense thing to do is save Jimi and train both the dog and its owner to be sociable.

That said, the rules need to be obeyed, he said.

“Large dogs belong in large-dog parks, and small dogs belong in small-dog parks,” Hobbs said. “And I think we need to address that whole issue as well. I think it has to be brought up. Whether it’s a high-priority item or not, it still has to be addressed.”