Fonteece sentenced to one year probation

Following sentencing for criminal negligence, Peter Fonteece said he plans to publish a psychological thriller and start a foundation in his wife’s memory. Fonteece, 48, appeared at Superior Court in Thunder Bay on Thursday.
May 13, 2010 6:32 PM By: TbNewsWatch.com Staff 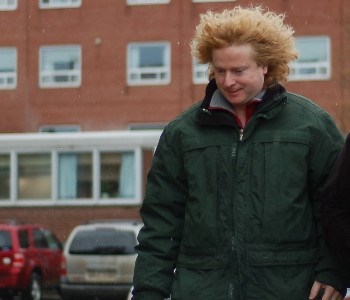 Peter Fonteece arrives at Superior Court on Thursday (tbnewswatch.com)
Following sentencing for criminal negligence, Peter Fonteece said he plans to publish a psychological thriller and start a foundation in his wife’s memory.

Fonteece, 48, appeared at Superior Court in Thunder Bay on Thursday. Convicted of criminal negligence in the death of his wife, Yanisa,. Fonteece received one year of probation. He also received credit for 105 days served .

The Waterloo man is expected to attend any counselling, complete 120 hours of community service and participate in the John Howard Society re-integration program.

"I’m grateful for the judge’s understanding of the complexity of this situation," Fonteece said. "I wasn’t certain of the outcome at all. Yanisa is my sweetheart and she’s still with me and we’ll always be together."

Fonteece said he plans to create a foundation that would focus on women who were abused sexually and emotionally by their mothers and emotionally tortured by their employers. He added that the foundation would be in honour of his wife who he said was a victim of abuse herself.

"One of the ways I hope to get the foundation established is by finally having my novel published," he said. "It is important that people look at employers and see what kind of power they have and the abuse they can do to an individual."

Fonteece said he completed the book in 2004 but wasn’t able to get it published.

Before his sentencing Thursday afternoon, the court heard that Yanisa, 38, lost her job in Waterloo and Fonteece was unable to work because of a vision problem. The couple was together for 18 years and was travelling to Manitoba to look for work.

During their trip, their car broke down in Thunder Bay. They checked into a motel on Feb.2, 2009. While in the motel the couple discussed taking their own lives.

The court heard how Yanisa later took more than 40 sleeping pills and drank vodka while Fonteece stood by. Once he knew she had died, he left the motel room and tried to take his life by hanging himself from a tree.

The hanging failed when the belt broke. Fonteece tried and failed several more times and eventually gave up. On Feb. 6, 2009 he called 911 and told police about his wife.

"He grieves her loss," Pierce said before sentencing. " It is he who has suffered the most from her death. His wife’s death left him quite alone in the world. He is a gentleman and does not present a risk to other people. By temperament, he is introverted, polite, respectful and lonely."

However, Pierce said Fonteece had an obligation to Yanisa as her husband to preserve her life by seeking medical care for her.

She said the focus of the sentencing was to place Fonteece on the road to rehabilitation.