Winter cycling is gaining traction across Thunder Bay. In the past couple of years cyclists across the city have started to embrace fat bikes, which have special oversized winter tires to allow riding in the harsh winter months.
Feb 22, 2014 2:03 PM By: TbNewsWatch.com Staff 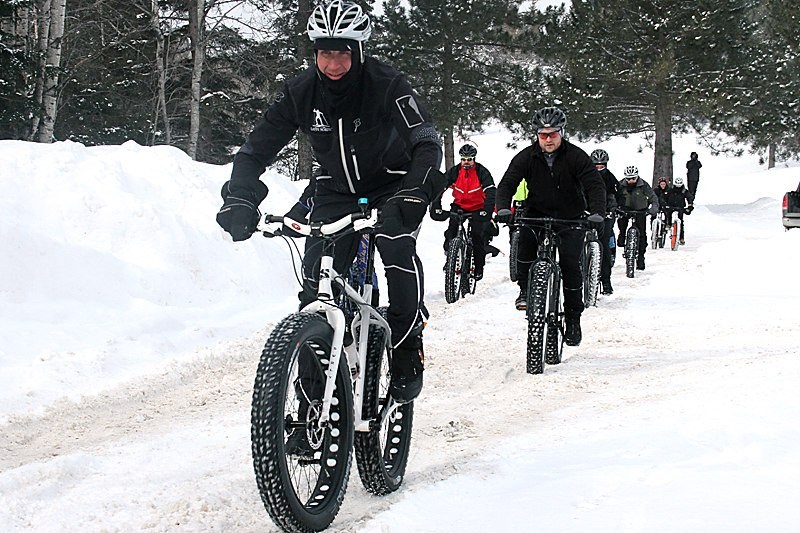 In the past couple of years cyclists across the city have started to embrace fat bikes, which have special oversized winter tires to allow riding in the harsh winter months.

“Obviously we have a long winter up here and I think that’s been a big market for fat bikes,” he said at the Kinsmen Park in Trowbridge on Saturday.

“They’re great for the snow and compact trails and there are a lot of great options for trails. It’s a great way to extend the riding season.”

The tires are the distinguishing feature of the fat bikes. They are nearly twice as wide as a normal bike tire and have additional grip to provide traction on the snow and ice.

The size of the tires, along with a lower air pressure, gives the rider a sensation as if they are floating on top of the snow.

It’s not the same as normal cycling.

“You’re always putting more power into the pedals to cover the same amount of distance.”

Maranzan estimates that there are now nearly two dozen fat bike riders in the city, up from just a small handful one year ago.

“Here in town I think there were about three people who had the bikes last year,” he said. “Already that has grown close to 20 riders at least that we know of and possibly more.”

A significant appeal of the fat bikes is the ability to explore some uncharted terrain on a bicycle. Winter conditions allow cyclists to follow snowmobile tracks on frozen lakes and rivers to get new vantage points of different areas.

“A couple of weeks ago I rode on the frozen McIntyre River all the way from the hospital up to the Tapiola ski trails off Government Road,” Ailey said.

“I was weaving my way along the river on snowmobile trails and it’s somewhere I’d lived close to all my life and I’d never seen any of that. I didn’t know what was coming around the next corner.”

The only major downside to the fat bikes, as riders were reminded at the planned first annual Abominable Bike Race, is that they are at the mercy of Mother Nature.

The snow and high winds completed covered the track that organizers were planning on using as a race course, leading to last minute improvisations. Instead of holding a formal race, organizers just conducted a group ride.

There is a Facebook group set up for Thunder Bay fat bike riders.