UPDATE: Hamilton found to be in conflict of interest in designated truck route vote

A vote on the designated truck route has been deferred to a later date, while the Integrity Commissioner has found Coun. Brian Hamilton was in conflict of interest when voting on the bylaw
0
Oct 7, 2019 8:46 PM By: Doug Diaczuk 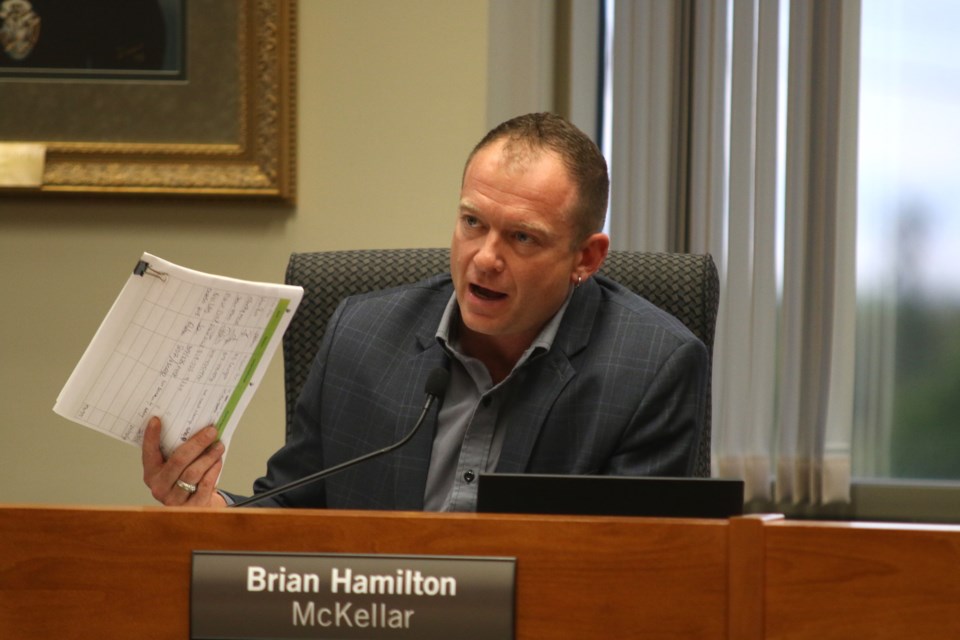 THUNDER BAY – A Thunder Bay city councilor has been found to be in conflict of interest when voting on the designated truck route bylaw, the future of which will not be decided until a later date.

According to a report prepared by the Integrity Commissioner for the City of Thunder Bay, which was made public on Monday, McKellar Coun. Brian Hamilton was found to be in conflict of interest when voting on the designated truck route during the June 17 meeting that would have formalized and implemented the bylaw.

The decision to institute a designated truck route was passed last January and ratified in March, both by a vote of 7-6.

Hamilton originally voted in favour of ratifying the designated truck route, but changed his vote during the June 17 meeting and came out against it.

At-large Coun. Trevor Giertuga filed a complaint with the Integrity Commissioner on July 10 regarding concerns about Hamilton’s participation in the June 17 vote and that it breached the Municipal Conflict of Interest Act because of Hamilton’s pecuniary interests as a business owner.

“In discussions with Coun. Giertuga he stated that during the proceedings he had a discussion with Coun. Hamilton about a possible conflict of interest and advised him he thought he was in a conflict and should not participate, but that it was his decision,” the report from the Integrity Commission reads. “When Coun. Hamilton went on to participate in the vote on the bylaw, he felt it was clearly a conflict of interest and breached the Municipal Conflict of Interest Act.”

Giertuga said he approached Hamilton advising him of his potential conflict of interest after Hamilton met with Thunder Bay Chamber of Commerce president, Charla Robinson, who advised him that his business could be impacted if the designated truck route was implemented.

"He was in favour and after that he did change his vote," Giertuga said. "Whether that was the reason or not, the optics were there was a conflict of interest."

The report continues that Hamilton said he had a “high degree of uncertainty around his position on the DTR (designated truck route).”

“He stated that as far as a financial impact to his restaurant it would be minimal except for one reoccurring requirement for product delivery, he for the most part does all his own purchasing.”

The Integrity Commissioner found that Hamilton was in conflict of interest and did breach the Municipal Conflict of Interest Act.

“Given the fact that during the June 17, 2019 meeting and in particular during the discussion with the president of the Chamber of Commerce, Coun. Hamilton asked if the DTR would affect the cost of his operations I find that he did have a pecuniary interest and was therefore in a conflict of interest as defined in the legislation and the City of Thunder Bay’s Code of Conduct.”

"This is something I did talk to councilor Hamilton that night and let him know and he did what he thought was right," Giertuga said. "I’m happy with the ruling. I think it will get council members more training and get them to learn about the processes."

It is recommended that Hamilton be made aware of the outcome of the investigation and that he declare his conflict of interest with respect to the designated truck route.

It also calls for more training for all councillors to ensure they have a clear and definitive understanding of pecuniary interest.

Hamilton said this is uncharted territory for city council because of the new legislation and rules they have to follow.

"At the same token, it has equipped council potentially with tools to silence votes," he said. "The conflict of interest claim against me is totally bogus and absurd. But it provides a procedural opportunity for a councilor to weaponize the language to potentially silence a vote."

Hamilton added that if he has to sit out on the vote for the designated truck route he will, and while he did not say if he would have voted in favour of it on Monday, he said the best option for the city could be to implement the route and collect data to see if it is working.

"I could have been down here tonight and voted in favour of the DTR and we could be looking at a very different conversation right now," he said.

An amended version of the designated truck route bylaw that would see vehicles weighing more than 15,000 kilograms restricted to provincial highways and kept off Dawson Road and Arthur Street, was to be voted on during Monday night’s city council meeting.

Northwood Coun. Shelby Ch’ng brought forward a motion to defer discussion on the designated truck route bylaw to a future meeting no later than Dec. 2.

Ch’ng told council that she wanted to deter the vote on the bylaw in light of information that came from the report by the Integrity Commissioner.