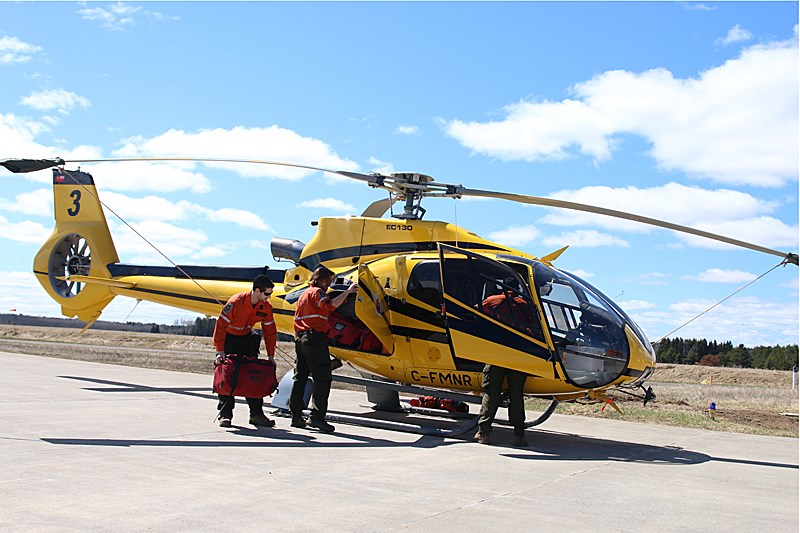 NIPIGON, Ont. -- The Ministry of Natural Resources and Forestry has deployed a large fleet of aircraft and additional ground attack crews at a blaze burning northeast of Nipigon.

Nipigon District Fire 099, in the Kama Hill area, grew from 400 hectares to 650 hectares between Sunday evening and Monday evening. The wildfire was ignited by a lightning strike on Saturday.

Despite aggressive suppression efforts the flames spread over rocky terrain in what the MNRF describes as extremely dry conditions.

The ministry has assigned four helicopters, with two larger helicopters dedicated to water bombing. Two CL-415 heavy waterbombers have also in action over the fire.

By the end of Tuesday, the MNRF expected to have 14 fire ranger crews fighting the blaze on the ground, including some units from northeastern Ontario.

Spokesperson Bill Ringham at the Thunder Bay fire base said crews were hoping to have a good day "in terms of our ability to reign this fire in a bit."

The closest values to the fire include some summer cottages and a commercial logging operation, but Ringham said the fire poses no imminent threat to them.

Also in the Nipigon fire district, ministry officials said a blaze on the Black Bay Peninsula "is being managed to renew the forest ecosystem."

Dozens of other fires continue to burn across northwestern Ontario, including near the territories of seven First Nation communities.

Thunderstorm cells that have passed through the region have sparked a number of fires, resulting in ministry crews being dispatched to several locations in the far north.