THUNDER BAY – Mayor Keith Hobbs has apologized for any hurt feelings a recent email that labeled a murder suspect the “Fresh Breath Killer” may have caused the victim’s family.
Sep 21, 2012 1:59 PM By: Jeff Labine 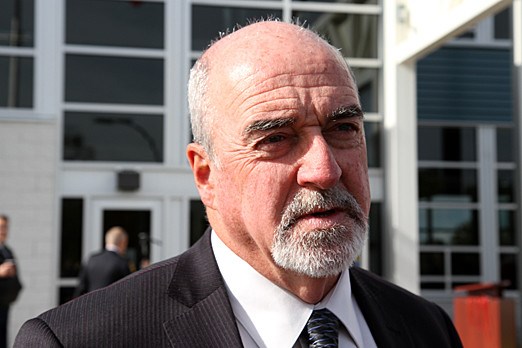 THUNDER BAY – Mayor Keith Hobbs has apologized for any hurt feelings a recent email that labeled a murder suspect the “Fresh Breath Killer” may have caused the victim’s family.

The email, sent Sept. 1, was quickly retracted by police.

It was reported by media on Sept. 4 and ultimately led the family of 65-year-old murder victim Adam Yellowhead to file a human rights complaint against the officer in question, Police Chief J.P. Levesque and the Thunder Bay Police Board, suggesting police had immediately dismissed racist overtones they felt the email contained.

Hobbs said dark humour has always been a part of policing, and Thunder Bay is no different. It’s not about to change, he added, not faulting the officer for creating the message in the first place.

“It’s not just in policing. There’s dark humour in every profession,” he said.

“Are you going to stop the world from using dark humour in the workforce or put internal emails that were meant internally out of commission? I don’t think so. We still have freedom of speech. You’re never going to stop that.

"You will have to take on the police services of the world because that’s what you’re going to have to do on this issue. If you’re going to get edicts from every police not to give handles to serial killers or killers, good luck with that.”

Police have given suspects nicknames since the time of Jack the Ripper, he added.

The police email that led to Friday’s apology has garnered national attention.

The incident was detailed in an opinion column in Thursday’s Globe and Mail, and as a news story in Friday’s Toronto Star.

Hobbs, who was quoted in the Star, said he wanted to apologize as the mayor and not as a member of the Police Service Board, which he sits on. Hobbs had earlier stated that the police service didn't need to apologize, but admitted that he regretted making that comment.

He said the email was insensitive to the family and friends of the victim, but repeated his position that he did not view it as racist.
He then called out the media for being insensitive for reporting on the existence of the email.

“Feelings were hurt obviously,” he said.

“People are criticizing the police for this email being insensitive and I totally agree. But the media are the most insensitive people when it comes to reporting on this. They thrive on nicknames when police give a nickname to a killer.

“The media runs with that. These stories of dismemberment from Montreal and in Toronto recently, does the family really need to read that in the paper about their family member? You talk about insensitive. Everyone needs to be a little bit more sensitive and the media aren’t an exception.”

Hobbs said he wants to move forward and plans to meet with First Nation representatives to continue building bridges with the Aboriginal community.

He called it a nasty bump in the road but said they’re going to smooth it out.

“The message I want to get out is we have built great relationships over the years with Aboriginals,” he said. “Apologies have been made by the officer and by the service.”

Police Service Board chairman Joe Virdiramo said they have been monitoring the situation and felt this was the best time to release an apology. Unlike the mayor, Virdiramo said he doesn’t blame the media for chasing after the story.

“This was an unfortunate incident shouldn’t have happened,” Virdiramo said. “It’s a lesson learned and I’m sure it won’t happen again and this kind of email won’t be sent out. The media has a right to express their views the way they see it. I don’t blame the media at all.”

Meanwhile, a group of First Nation communities and Nishnawbe Aski Nation announced in a news release issued Friday afternoon that they were moving forward with the human rights application.

The application is asking for an investigation into the conduct of the Thunder Bay Police Service.

"Whether or not the police services board or the Thunder Bay mayor apologized for this unfortunate incident, the family and communities are still intent on moving forward with the application,” said Deputy Grand Chief Alvin Fiddler.

“We are also not scheduled to meet over this issue with either the mayor’s office or the police services board as they asserted in reports. It’s a shame that this incident took place in the first place, but we must move forward and learn to work together to make this city safe and welcoming for everyone.”

The news release also states that NAN officials wrote to Thunder Bay Police Chief Levesque Friday and advised that First Nations are pursuing their remedies with the Human Rights Tribunal and do not support pursuing this issue with the Office of the Independent Review Director.

"Regrettably, the public comments (Friday) of Police Board Member Mayor Keith Hobbs to the effect that this kind of “dark humour” is “not about to change” and is an acceptable part of policing simply confirm that influential leaders in Thunder Bay are not retracting or apologizing provides every justification for First Nations’ insistence that this proceed to a Human Rights Tribunal,” said Julian Falconer.