Hunt is on: Council votes in favour of deer-hunting bylaw 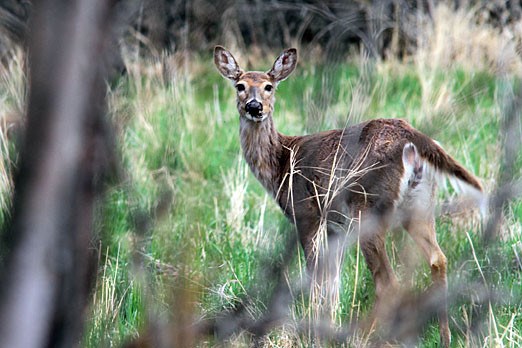 City council passed a bylaw that will allow hunters to use bow and arrows to hunt deer in certain areas of the city. (Jeff Labine, tbnewswatch.com)

Thunder Bay council has given residents the go ahead to hunt deer in certain areas of the city.

The bylaw to allow deer hunting with bow and arrows in certain areas of the city passed nine-to-two at council Monday night. Only Couns. Joe Virdiramo and Andrew Foulds voted against the bylaw. Council put the bylaw in place as a way to manage the increasing deer population and prevent collisions with motorists.

In order to hunt within city limits, hunters must have written permission from the property owner, must be in a stand at least three metres high and must be further than 75 metres from a home or road. Hunting can take place on private lands within city limits south of Kaministiquia and west of the Thunder Bay Expressway with certain limitations.

Foulds said while it’s important to have a plan, he thought the bylaw wasn’t adequate in accomplishing this goal. He said there was no way of knowing how many deer were in the city and if hunting would be the solution to control their population.

“I’m just not sure when we got into the wildlife management business,” Foulds said. “This bylaw really is about wildlife management. I don’t think this is good policy. I don’t think this is good policy because there’s no measurable. Even when we received the report, the measurable and the data presented to us were fuzzy at best. We don’t know the scope of the problem.”

He said many have argued that something is better than nothing but Foulds pointed out that the hunting in Duluth hasn’t helped their deer problem.

Neebing Coun. Linda Rydholm disagreed with Foulds and said Duluth has actually expanded the areas where hunting is allowed.

She said she knows two people who have lost their car insurance because of incidents with wildlife and over time, data will be systematically collected by the OPP and city police to find out how many deer have been involved in collisions.

She said she hoped this solution would work and the city wouldn’t have to resort to a cull.

At-large Coun. Aldo Ruberto said most of the areas where hunters would be allowed to bow hunt was outside of residential areas anyway with most located in rural areas.

“I think there will be very few people taking advantage of this opportunity,” Ruberto said. “We’ll have the option to review the options and amend this bylaw and make changes if it isn’t successful or something goes wrong.”

The bylaw will become in effect this September following the opening of the hunting season.