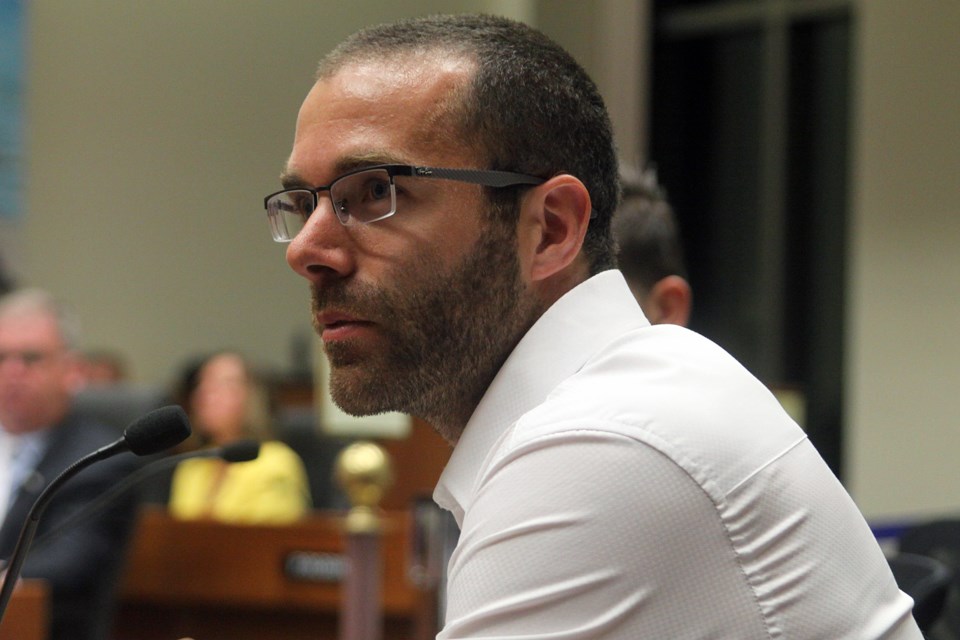 THUNDER Bay – Michael Veneziale isn’t about to give up on the proposed indoor turf facility that was dealt a major setback Monday, when city council voted not to award a recommended construction tender.

The Soccer Northwest Ontario president maintains there’s a clear case for the facility, which has been endorsed by council as a priority infrastructure project and remains approved in principle.

He also believes there’s more community support than rhetoric at city hall and on social media might suggest.

Still, Veneziale acknowledged Monday’s vote, the latest of several twists in the campaign for the sports complex, could mean years of delay.

“We definitely knew there was the potential for it not to pass,” he said. “One of the most worrisome parts is that some councillors seem to believe by not going ahead with this tender that this project is going to die.”

Mayor Bill Mauro was one of several supporters to express that sentiment Monday night, alluding to the end of council’s term in 2022.

“It’s possible this is the end of the road if it doesn’t pass tonight,” he said. “We’re running out of runway.”

Others who voted not to award the tender said they remained committed to the turf facility, but it simply wasn’t the right time.

“I support this project 100 per cent,” said Coun. Kristen Oliver, who voted no, citing concerns over rising project costs and the financial impact of COVID-19.

“When we have the discussion in the community, is this a need versus a want, I see this as a need. I know there are many in this community who don’t, but I think we need to really invest in our city so we can retain and attract people.”

For Veneziale, there’s a certain irony to the argument to wait over financial concerns. Previous delays are largely responsible for inflating costs in the first place, he said.

Project costs have risen from an estimated $25 million in 2017 to $37 million, after a recent increase.

The full lifetime cost to the city is pegged at $46 million, accounting for interest on a $16.6 million, 25-year debenture.

While the debate over the project has raged, Soccer Northwest and others have struggled to find indoor facilities.

In 2016, the Sports Dome at the CLE grounds collapsed, leaving an estimated 3,500 adult and youth players scrambling for alternatives. A dome at Confederation College was used by some groups, but it also collapsed and was removed.

An effort to find a temporary home in an industrial building on Maureen Street failed in 2017.

A soccer bubble on Golf Links Road, proposed by an investor group led by developer Robert Zanette, secured zoning approvals in 2019. As of August 2020, investors had yet to commit to move to the construction phase. Tbnewswatch has been unable to reach Zanette for comment.

Soccer Northwest took over a rink at the Tournament Centre for two years beginning in the fall of 2020. That’s enough to meet only a small part of demand, Veneziale said.

“I think a lot of people don’t quite understand the size of the user groups. Right now, one field is helping out roughly 30 to 35 per cent of just the soccer community – and that doesn’t take into consideration all of the other potential user groups.”

The city has also received expressions of interest from groups like schools and the 55 Plus Centre, said general manager of community services Kelly Robertson.

She estimates demand for field time at the turf facility would exceed supply by 28 per cent during peak times like evenings and weekends.

Soccer Northwest has long argued soccer players are not provided the same opportunities as other large recreation groups like swimmers or hockey players.

“We provide world-class swimming facilities, workout facilities, squash courts, and a multitude of skating surfaces that are supported by the city,” Veneziale said.

“Why have we been telling thousands in our city, sorry, we support one group but not the other? Imagine telling all the current city-run facility users, I’m sorry, for the next 10 years you can’t use the city-run swimming pools or rinks.”

Veneziale sees the complex in the tradition of the Canada Games Complex, Community Auditorium, and Prince Arthur’s Landing, infrastructure investments he said have paid off with clear quality-of-life benefits.

“We’re going to be building this facility not for today, not even for tomorrow – it’s two years from now when it starts, and then it’s 50-plus years after that,” he said.

Much of the public debate has focused on the negatives without accounting for the benefits, he believes.

“I’m very confused and frustrated by some councillors that have only mentioned one side of this,” he said.

Critics rarely acknowledge the eye-popping $46 million figure would be spread over a quarter century, or that a significant portion comes from other levels of government, supporters like Veneziale and Mauro have argued.

That includes nearly $7 million in federal gas tax dollars allocated to the indoor turf facility reserve fund, and over one million from Municipal Accommodation Tax revenue (both amounts could be used for other projects, should council choose).

“I’ve never yet heard somebody opposed to the project say that on a radio program or in a newspaper article,” Mauro said Monday. “Why doesn’t anybody say that, to tell the whole story to the community?”

Veneziale believes social media has perpetuated misinformation and negativity around the project, a concern echoed by some at council.

“I think there’s a very big misperception [based on] people posting on Facebook,” he said. “As a very simple example, I received over 100 messages, phone calls, and emails [in the hours following the council meeting]… 98 of them are not active on Facebook.”

While he’s frustrated with the delay, Veneziale remains optimistic. The federal government often steps up infrastructure funding following economic downturns, he said, which could open up new possibilities.

Soccer Northwest remains committed to its pledge to raise $1 million for the complex, he added.

The group has been advised by city staff to hold off on fundraising until a tender is granted, Veneziale said, but has a professional campaign ready to go.

Mayor Bill Mauro said Wednesday he remains hopeful the city will see some form of indoor turf facility built in the near future.