THUNDER BAY – A system designed to aid people injured on the job is failing those who need it, say local injured workers. A number of injured and disabled workers gathered outside the constituency office of local MPP Michael Gravelle (Lib.
0
Dec 8, 2014 3:09 PM By: TbNewsWatch.com Staff 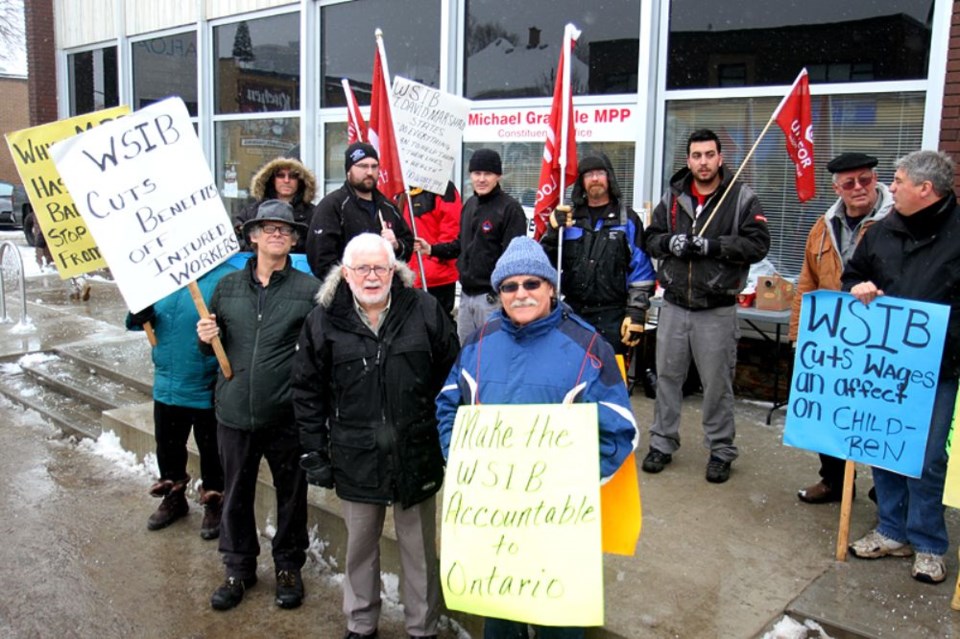 Injured workers gathered outside the office of MPP Michael Gravelle to advocate for changes to the WSIB system. (Matt Vis, tbnewswatch.com)

THUNDER BAY – A system designed to aid people injured on the job is failing those who need it, say local injured workers.

A number of injured and disabled workers gathered outside the constituency office of local MPP Michael Gravelle (Lib., Thunder Bay-Superior North) Monday afternoon, advocating for changes to the Workers Safety and Insurance Board system.

Greg Snider, president of the Thunder Bay and District Injured Workers Support Group, said total WSIB payments are down while the percentage of denied claims are increasing.

“We’ve had people who have had injuries for extended periods of time and people who haven’t gotten benefits that were approved in the past. They go back to get that same benefit because of a recurring injury they have and they’re being denied,” Snider said.

“That kind of stuff is extremely frustrating because the injured workers seem to have no control over it which adds to stress and just adds to the injury.”

“The purpose of the WSIB existing is for injured workers and it seems to be not working for them at all,” he said.

The demonstration was one of several taking place across the province, coinciding with an address from Minister of Labour Kevin Flynn in Toronto.

In addition to the increased denials, injured and disabled workers are protesting cuts to long-term benefits and changes to the recognition of a permanent impairment.

They are also looking for the end to time limits for injured workers and enhancements to health care coverage.

Eugene Lefrancois, chair of the Ontario Network of Injured Worker Groups, said issues with the system goes beyond WSIB and need to be addressed by the provincial government.

“I think what they have to do is talk to injured workers and roll up our sleeves and work on this,” Lefrancois said. “We are not going away.”