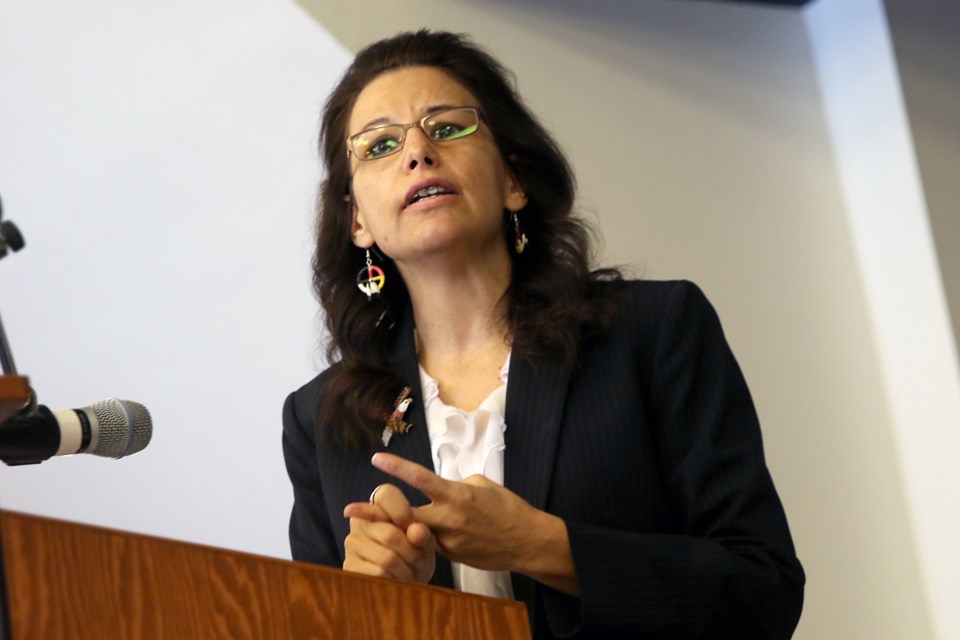 Angelique EagleWoman resigned her position as dean of Lakehead's faculty of law in 2018. (File photo)

THUNDER BAY – Lakehead University has settled with the former dean of its law school, Angelique EagleWoman, who alleged she faced a culture of systemic racism.

EagleWoman filed a lawsuit seeking more than $2.6 million on the basis of constructive dismissal and Ontario Human Rights Code violations in 2018, months after resigning as head of Lakehead’s Bora Laskin Faculty of Law.

That suit was resolved in August of 2020, her legal counsel has confirmed.

Paul Champ of Ottawa-based Champ & Associates said he was unable to comment further on the settlement.

“We can confirm that the matter was resolved to the mutual satisfaction of the parties,” Lakehead said simply in a brief statement.

EagleWoman was welcomed to much fanfare in 2016 as the first Indigenous law dean in Canada. The American legal scholar had also served as a judge in four tribal court systems and as general counsel for her own tribe, the Sisseston-Wahpeton Oyate in Dakota.

Behind the scenes, EagleWoman alleged, it didn’t take long for relationships to sour over what she called micromanagement and a hostile workplace marked by systemic racism against Indigenous people.

“From the very beginning of my tenure as dean, I felt there were certain staff and faculty members that were very resistant, and over time I began to see the systemic racism and called for cultural competency training within the faculty of law,” Eaglewoman said.

Internal resistance to that training, as well as having to teach all mandatory Indigenous law courses on top of her duties as dean, began to affect her health and family, according to her statement of claim.

“You would expect when a dean was challenged internally, that senior administration would give me the tools and the ability to respond, but in fact I wasn’t given that, I was told to placate,” she said shortly after her resignation.

“I felt like a non-Indigenous person in that role would have absolutely been supported in a way that I was not.”

Instead, EagleWoman alleged she faced micromanagement, being asked at the start of her tenure to report all interactions and communications with faculty members to then-vice president Moira McPherson, who has since been named the university’s president.

Lakehead also placed a consultant into the chain of command between EagleWoman and university administration, she claimed, saying it discredited her leadership style and devalued her years of experience.

“But [it] never gave [her] the authority or respect that her position as dean entailed, and failed to address the discriminatory work environment through cultural competency training or other proactive measures.”

EagleWoman, whose term was to last until 2021, also claimed Lakehead underfunded its law school, with only 65 per cent of its generated revenue allocated into its approved budget.

Her departure in April of 2018 prompted strong reaction from regional Indigenous groups, with leaders from Fort William First Nation, Nishnawbe Aski Nation, and the Metis Nation of Ontario calling for an independent review of the law school.

EagleWoman is now a tenured professor at the Mitchell Hamline School of Law in St. Paul, Minnesota, her legal counsel noted.