Vanessa Chorkawy will take the reins in early 2022, with Brett Hagarty taking the job on an interim basis until the new coach's obligations at Acadia University are up.
Jul 20, 2021 5:50 PM By: Leith Dunick 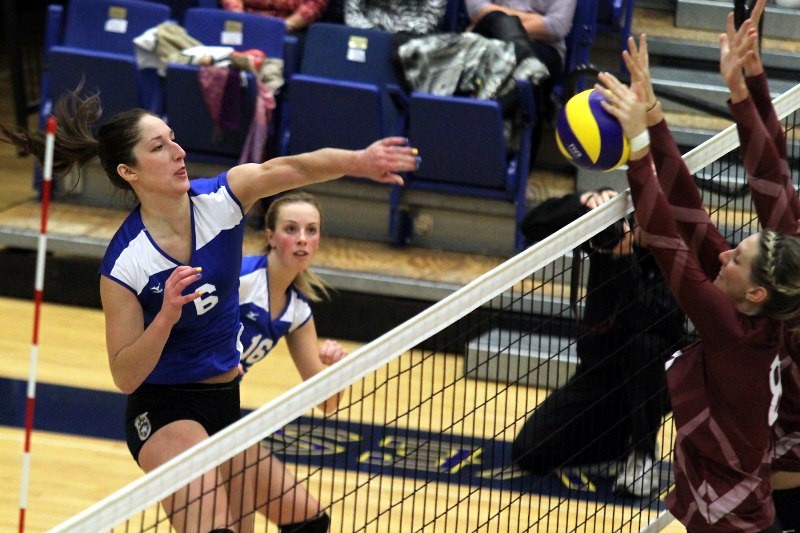 Lakehead's Vanessa Chorkawy sends a shot into a crowd of McMaster players during the second set Friday night in OUA women's volleyball action at the Thunderdome. (Leith Dunick, tbnewswatch.com/FILE)

THUNDER BAY – The Lakehead Thunderwolves are bringing back one of their own to coach the women’s volleyball team.

Vanessa Chorkway, a perennial OUA all-star and a Team Canada athlete, has agreed to take over the reins of the team from Craig Barclay, who resigned last summer.

The Thunderwolves, like all OUA sports teams, were sidelined in 2020-21 by the effects of COVID-19 and did not play.

Chorkawy will be joined by interim coach Brett Hagarty, the head coach of Team Ontario’s beach volleyball program since 2016, who will guide the club until Chorkawy officially takes over in early 2022 after her teaching obligations at Acadia University in Nova Scotia ends.

"Building trust and a winning culture begins with investing in your people," said Chorkawy, who played for the Wolves between 2007 and 2013.

"The players, coaches, support staff - everyone contributes to developing leadership opportunities and supporting individual growth for one another to be successful."

Hagarty is excited at the chance to fill in, while taking a leadership role in women’s volleyball at the university level.

"It's an incredible honor," Hagarty said. "We need more women coaches at the university level, and I couldn't be happier to be gaining this valuable coaching experience together with Vanessa."

It was the perfect fit, Chorkawy added.

"This coaching transition plan is an innovative opportunity for Lakehead to champion leadership roles for female coaches, and I'm proud to be one of them," she said.

Lakehead athletic director Tom Warden said both Chorkawy and Hagarty will be great fits for the program, which finished with a 2-17 record in 2019-20 and has not finished at .500 or better since 2012-13, when the Thunderwolves were 9-9.

“These young professionals share a coaching philosophy and bring a proven pedigree of competitiveness to our women’s volleyball program,” Warden said.