Bruce Hyer has quit the NDP. The two-time Thunder Bay-Superior North MP made the announcement Monday afternoon. Hyer cited a dysfunctional parliament as one of the driving factors for his resignation from his party.
Apr 23, 2012 2:30 PM By: Jamie Smith 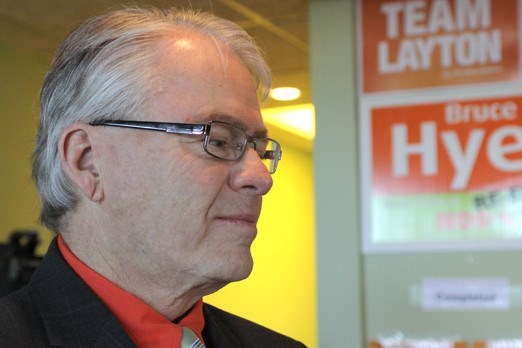 Bruce Hyer has quit the NDP.

The two-time Thunder Bay-Superior North MP made the announcement Monday afternoon. Hyer cited a dysfunctional parliament as one of the driving factors for his resignation from his party.

But during an interview with tbnewswatch.com, Hyer explained that there‘s no single reason behind his decision to be an independent member in Parliament. For months and years he says he has been frustrated by what he calls the lack of democracy in all three parties.

“I’ve never seen anything as dysfunctional as parliament,” he said. “Putting constituents ahead of party politics is just not allowed.”

While Hyer doesn’t believe the NDP are the worst violators of democracy in Parliament, he said Mulcair’s decision to try and reintroduce the gun registry and whip associated votes is not right.

“I feel it’s a sin to not let their members vote with their conscience for their constituents,” he said.

Being snubbed by the shadow cabinet is another reason for the move. Hyer doesn’t know if it was his aggressive backing of Nathan Cullen in the recent leadership race or his calls for abolishing the long-gun registry that left him without a critic role.

“It’s just another way besides whipping votes of muzzling my constituents,” he said.

Hyer said he knows there are people in Thunder Bay-Superior North that voted for him because of the NDP affiliation who will be angry with his decision. But he hopes they will eventually be comfortable with his independent status.

“I truly believe I’ll be better able to speak up for them.”

The announcement comes shortly after the Thunder Bay member was seemingly snubbed by Tom Mulcair. The newly elected NDP leader appointed a 54-member shadow cabinet last week, and did not include Hyer.

Even rookie MP Ruth Ellen Brousseau, who made headlines when she took a trip to Las Vegas during the last federal election and had never visited her riding of Berthier-Maskinonge, was appointed deputy critic of Agriculture.

Rafferty said while he respects Hyer, he believes his colleague's decision is a tremendous mistake.

Muclair, who Rafferty endorsed in the leadership race, and the NDP will work together to do what they can to stop the Conservative government Rafferty said in a media release.

“So that we can undo the much of the damage that has been done to our human rights, the environment, and the Northwestern Ontario economy by the Harper Conservative government and the Liberal governments before them,” he said.

Hyer ran for the party since 2004, finally winning over Liberal newcomer and Schreiber mayor Don McArthur in 2008. He took the 2011 election with 49.8 per cent of the vote, beating Conservative Nipigon mayor Richard Harvey by more than 7,000 votes.

Below is the news release Hyer issued to media prior to making the announcement official Monday afternoon:


OTTAWA – Bruce Hyer has decided to drop his caucus affiliation with the NewDemocratic Party to sit as an Independent in Parliament.

“I was honoured when the voters of Thunder Bay-Superior North chose me to be theirvoice in the House of Commons. I committed to them to be honest, open, and accessible, and to keep my campaign promises.” said Hyer in the House of Commons.“I have much respect for most Members in this House. But our three main parties require lockstep discipline, with little room for meaningful public debate... or for putting constituents ahead of party politics.”

“Instead of cooperation and compromise, voters often see mindless solidarity, wherepolitical parties are always right and voters are always wrong. One example is the long gun registry, where there has been no real compromise at all. Mr. Mulcair has made it clear he will bring back the long gun registry, and will use the whip. I am also concerned that Mr. Mulcair does not seem willing to co-operate with other parties on issues. And on climate change, parties are hopelessly locked to Cap & Trade or outright inaction, making compromise to achieve even piecemeal progress impossible.”

First elected in 2008, Hyer was left out the NDP shadow cabinet announcement last week. “One of the jobs of any new Leader is to unite their party, and there are different ways to do that. Being excluded from a position was a definite message that myconstituents will be muzzled.”

“As an Independent voice, I will better be able to represent my constituents in Parliament. I will focus on doing what I have worked hard to do for over three years: Help the people being mistreated by Canada Revenue Agency or EI. Work with all parties or MPs when possible to make Parliament work. And speak up inside and outside the House for issues important for Northwestern Ontario, and Canada.” Hyer concluded.