Lefty to start Game 1 for Canada

Canada kicks off its bid for gold on Friday night at Port Arthur Stadium against Chinese Taipei.
Aug 31, 2017 11:28 PM By: Leith Dunick 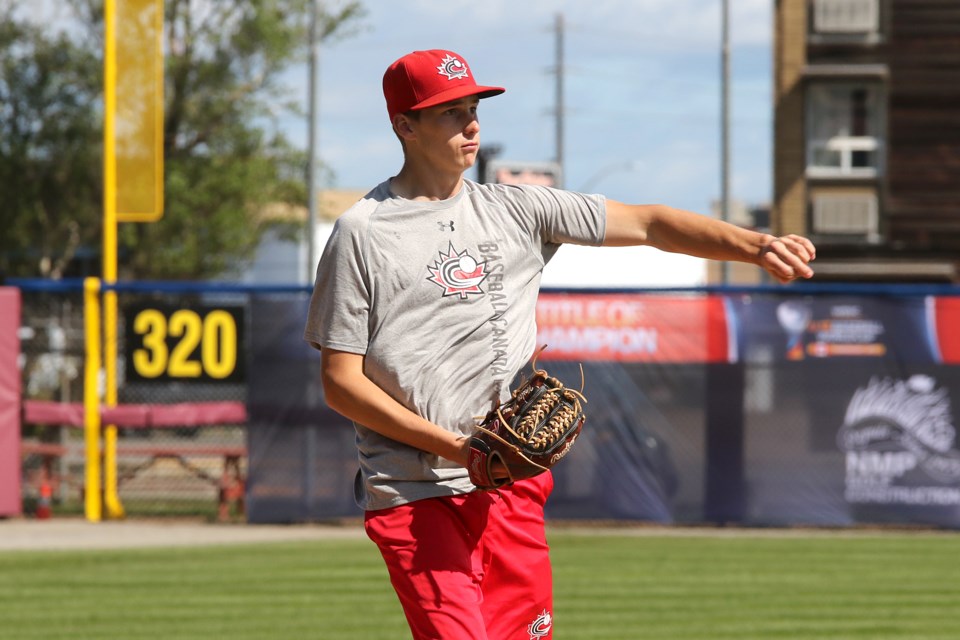 Southpaw Wesley Moore will get the start against Chinese Taipei on Friday, Sept. 1, 2017 at Port Arthur Stadium as Canada opens the U18 World Baseball Cup (Leith Dunick, tbnewswatch.com).

THUNDER BAY – Team Canada manager Greg Hamilton was looking for a pitcher who won’t let nerves get the better of him on Friday night.

He settled on southpaw Wesley Moore.

The Surrey, B.C. native was tapped by Hamilton to take to the mound in Canada’s opener at the 18U World Baseball Cup, being contested over the next 10 days at Port Arthur Stadium and Baseball Central.

He’s confident he’s up to the task.

“It’s pretty amazing, something I’ve dreamed about for a long time. It’s a pretty cool accomplishment,” said Moore, a member of the Vauxhall Academy of Baseball who last fall committed to play college ball at Cal State-Northridge.

The No. 11 ranked Canadian heading into next June’s major league baseball draft, Moore on Thursday said he’s not feeling any pre-game butterflies – at least not yet.

“I’m more excited than nervous. But pitching for my country is pretty cool, so I’m pretty excited for that,” Moore said.

He’ll make his U18BWC debut against Chinese Taipei, a team that won it all in Thunder Bay in 2010 and also captured gold in 1983 – nearly a generation before any of this year’s participants were born.

Moore said Hamilton has done his best to prepare his players for what’s to come in Thunder Bay, facing the best 17- and 18-year-olds the baseball world has to offer.

“Coming here we’re going to be facing a lot of strong arms. He’s put us against some tough competition to be prepared for worlds,” Moore said.

The teen hurler said the best way to stay on the road to success is to keep doing what he does best.

“I think I just have to be myself. I don’t want to change anything I’ve been doing all year. I think I’ve been in the position all year because of what I’ve done, so I think I’m just going to be myself.

Blessed with a fastball that tops out in the high 80s, Moore also brings a decent change-up and curveball to the mix he’s not afraid to throw early in the count.

“I think I just compete and go out there. I’m not an overpowering pitcher.”

Yet good enough for Hamilton, well aware a slow start could put Canada in early trouble at the 12-team tournament.

First pitch on Friday night is scheduled for 6:30 p.m. at Port Arthur Stadium.

Japan, with a contingent of nearly 60 journalists in tow, takes on Mexico to open the tournament at 9:30 a.m. Italy and Nicaragua start things off at Baseball Central, followed by the Netherlands and the United States at 1 p.m. South Africa and Cuba will wrap things up at 7 p.m. at Baseball Central. Australia and Korea play at 1 p.m. at Port Arthur Stadium.