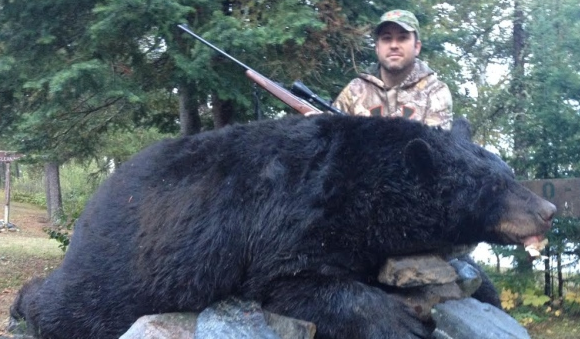 Trophy bear was shot near Longlac in 2014.

The shooting three years ago of one of the largest black bears ever harvested in Ontario has led to a stiff fine and the loss of hunting privileges for a Longlac man.

Michael A. Gauthier was convicted after a trial in Geraldton this week and fined $5,000 for hunting black bear within 400 metres of a waste disposal site.

He was also fined $1,000 for possessing wildlife illegally, and received a four-year hunting suspension. The bear was forfeited to the Crown.

According to a news release from the Ministry of Natural Resources and Forestry, court was told that on September 13, 2014, Gauthier shot and wounded a 760-pound bear within the Longlac waste disposal site. Several hours later, he returned to the site where he dispatched the injured bear.

The MNRF news release refers to the animal as a trophy bear.

Skull size is the usual measurement for determining bear records.

The weight listed in the news release was the "dressed" weight, measured after the internal organs were removed.

Ontarioblackbears.com lists the largest recorded weight for a black bear as 816 pounds.

However, the Federation for the Recognition of Ontario Wildlife says its records show the heaviest bear ever harvested in the province was 780 pounds. It was shot by a hunter using a cross-bow in the Nipissing area in 2007.