Zachary Barabe scored twice and Xavier Dupont recorded a 31-save shutout in the round-robin finale against the host Thunder Bay Kings on Friday night.
Apr 26, 2019 10:54 PM By: Leith Dunick 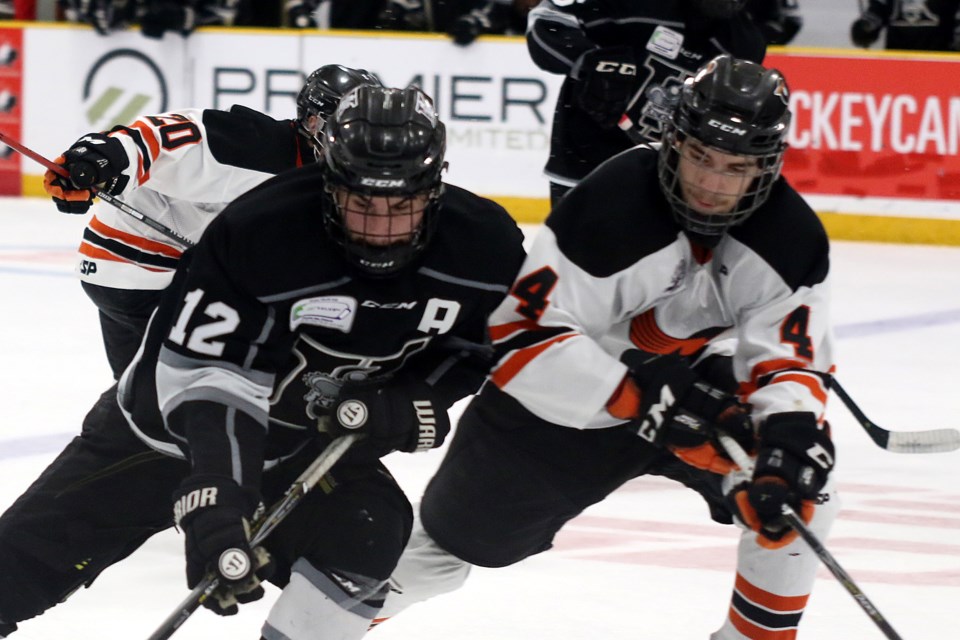 THUNDER BAY – The Thunder Bay Kings didn’t go down without a fight.

Fighting the undefeated, top-ranked Magog Cantonniers on Friday night in their final round robin game at the TELUS Cup, the Kings held their own for much of the night, matching their opponent chance for chance for 60 minutes.

Zachary Barabe scored twice to lead the Cantonniers to their fifth straight win at the week-long national midget AAA hockey championship, a tune-up for their semifinal match on Saturday against the West Region champion Tisdale Trojans.

The 3-0 defeat ended Thunder Bay’s tournament, their 0-4-1 record not entirely indicative of the effort they gave each and every game – surrendering the lead in the third period in their first three games against teams all still in the running for the TELUS Cup title.

“It was awesome. It was incredible. Words can’t describe it,” Aegard said. “It’s really neat to see the whole community of Thunder Bay come out and support us, especially not being able to have that many home games.”

It wasn’t for lack of trying that they came up empty in the win column, he added.

“I think our work ethic was there, we were all going. These teams are always going, they’re always in these Canadian leagues with teams just like them and they’re playing with them all year long. We’re in a good league too, but I think they have that little extra and we just didn’t have that.

Aegard said the Kings are pretty proud of how tight they played the Cantonniers, despite the final result.

They just couldn’t capitalize on their chances.

“Sometimes that happens. They’re a super good team, as the standings say. But we were right there. The margin for error for victory is just so small that it just came down to that,” he said.

Teammate Nicholas DeGrazia said it was business as usual on Friday night, even though the Kings had been eliminated from the medal round the night before.

“It’s not the result that we wanted, but I thought the boys battled hard all week. We just couldn’t come out with a win,” said DeGrazia, grandson of long-time Coun. Iain Angus.

“I was just excited to play one last game with the boys. It’s the last time all of us are going to play together, so it definitely was a good one.”

Barabe, who doubled Magog’s lead 12:19 of the second, one-timing a quick pass from Tristan Roy, said he was happy to help any way he could.

“It’s not my skill, but sometimes I can score, so I’m happy,” he said, adding the team’s main goal was to escape without injury or suspension.

Magog coach Felix Potvin, the former Leafs great, said the 5-0-0 record, the 19 goals for and only four against are nice statistics, but they don’t mean anything come Saturday.

“It’s all in the garbage now because tomorrow is one game, winner-takes-all,” he said of the semifinal matchup against Tisdale, a team they beat 6-0 to open the tournament on Monday.

“The main focus is to win tomorrow to have a chance to play for gold.”

Xavier Dupont made 31 saves to pick up the shutout, Magog’s second of the tournament. Eric Vanska started in nets for Thunder Bay, but was pulled after Barabe potted his second of the night six minutes into the third.

Jordan Smith took over and was perfect on all 11 shots he faced.

Thunder Bay coach Darrin Nicholas agreed in the long run, the memories are what will count.

That doesn’t make it feel any better in the moment.

“It hurts right now. We really prepared or the tournament like we were going to contend. It’s so close. The margins are so small,” he said.

Magog and Tisdale will play in the 6 p.m. semifinal on Saturday, while Toronto and Calgary will tangle in the 2 p.m. contest.