Mayor defends standing up against outside perception of Thunder Bay, signals intention to champion indoor multi-purpose sports centre.
0
May 14, 2019 11:37 PM By: Matt Vis 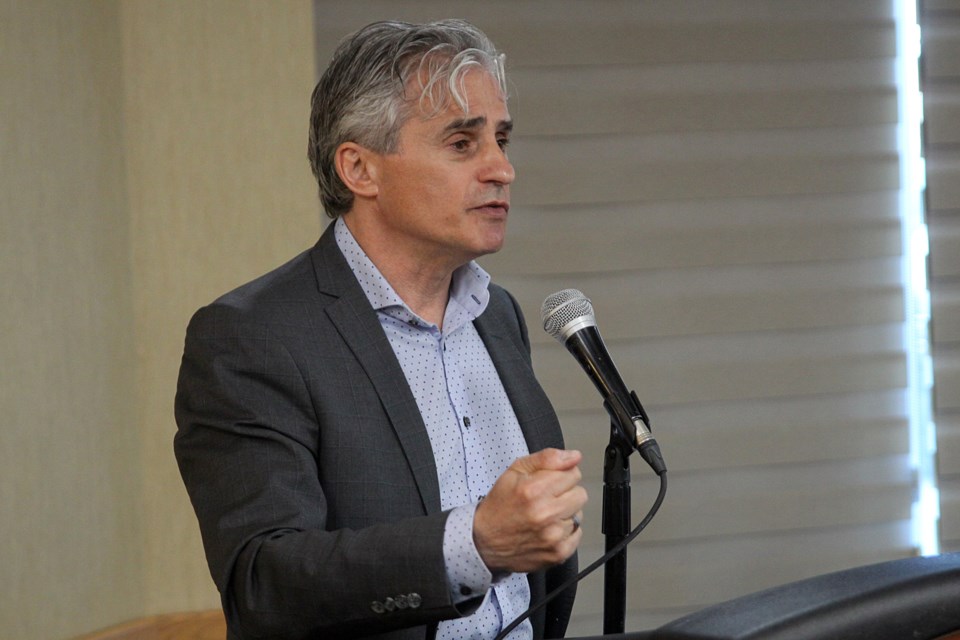 With an audience of about 100 city residents at the Victoria Inn on Tuesday evening, Thunder Bay's mayor spent more than two hours fielding questions, as well as outlining the fiscal climate surrounding the city.

When Thunder Bay's external reputation, particularly after last year's Office of the Independent Police Review Director and Ontario Civilian Police Commission reports, was brought up, Mauro passionately defended how he has characterized the issues facing the city.

"It drives me crazy having to listen to and fight back against the perception of our community that is being created on the national stage, not only because of but largely because of those two reports," Mauro said. "They intensified, in a laser-like way, the focus by national media on the city of Thunder Bay in my opinion very unfairly. I've been criticized by a lot of people for fighting back against the narrative because people feel I'm not acknowledging the problem.

"I say, 'Look, I acknowledge the problem but don't make it seem as if Thunder Bay is any different than anybody else. We all have the same problems, pretty much. This idea that Thunder Bay is somehow worse than everybody else and that we're the hate crime capital of Canada, the murder, it's just taking these stats to sell newspapers and it drives me insane. I've been criticized by a lot of people for standing up and fighting against that. There's national media that have come to the city solely for the purpose to report on that and how they're going to get their narrative."

Mauro, who acknowledged Thunder Bay has changed, supported efforts that have been made by the city.

"You should be taking great pride in the policies and the programs and the processes that are in place and have been in place for five or 10 years, long before those two guys brought their reports down, to help this city adjust to and accommodate and deal with the challenges that are present here today," Mauro said.

The meeting notice listed the city's pursuit of an indoor artificial turf facility, the city budget and provincial funding as agenda items. Mauro addressed all three during an opening 30-minute speech, including budgetary pressure that will be felt by the city as a result of decisions made by the Progressive Conservative provincial government. Thunder Bay city council will have a report from administration about the project at their June 3 meeting.

During the following question and answer session, Rod Bosch, who said he has three grandchildren who participate in soccer, asked the mayor about how the city has handled the file and whether a new facility is realistic.

"I, as a grandparent, don't want my son to move away and take his children with him," Bosch said. "They are at a competitive level. They would love to live here for the rest of their lives but if they want to progress to a point where they might want to do something with their athletic ability, they're going to have to move away and I don't want that to happen."

Mauro said he believes the city can move ahead with a permanent facility and that the money could be available, but it would require council to be willing to make some difficult decisions, say no sometimes and scope their priorities.

"If you're continually trying to be all things to all people, it's really, really hard to put your community forward and establish community building projects that in my opinion help to build your city," Mauro said, adding that people can live wherever they want to and asking why they would pick Thunder Bay.

"We've been producing hockey players here for decades and generations, why can't we do the same for soccer? Why is it 2019 – I'm not a tennis player – but why don't we have an indoor tennis facility in a city in a part of a country that has winter for eight months of the year, six months of the year? It's crazy that we don't. We have to be willing to invest in ourselves. If we're not willing to invest in ourselves and make those decisions, people aren't going to do it for us."

One of those particular difficult decisions might be about the future of Dease Pool, as supporters of the shuttered century-old swimming pool urged Mauro to reconsider its long-term fate. A petition calling for the pool to be rebuilt has garnered more than 4,000 signatures.

"McKellar ward really to this day has no organized soccer league, they have no organized baseball. It's probably still the only ward that I know that doesn't have a community centre," said Andy Savela, a former McKellar ward councillor. "We're not asking for a commitment to build a brand new facility that didn't exist. This, quite frankly, is all these children and families have.

"You really have to include the socioeconomic factors and benefits that pool provides to that neighbourhood. I think you have to listen to the people of that neighbourhood and talk to them in order to get that perspective."

Mauro told the Dease Pool supporters that a reconsideration of the decision to close the pool would require council to request the matter to be revisited and get a two-thirds majority, which he cautioned might not be likely considering only two councillors have opposed the pool's closure.

A report from administration outlining potential next steps for Dease Pool is expected to be brought to council in September.