The federal government has a plan to make the country’s resource sector environmentally and economically sustainable, but some don’t see it that way.
Jun 4, 2012 5:07 PM By: Jamie Smith 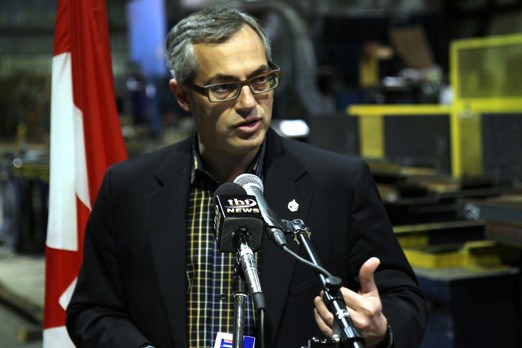 The federal government has a plan to make the country’s resource sector environmentally and economically sustainable, but some don’t see it that way.

FedNor minister Tony Clement was in Thunder Bay Monday to tout the Conservative government’s responsible resource development plan. Clement was just one of many ministers throughout the country Monday praising the plan in the wake of criticism from opposition members, most notably NDP leader Tomas Mulcair, and various environmental groups.

The minister said the plan will streamline the environmental review process, strengthen protection and enhance Aboriginal consultation all while making the country’s resource sector more attractive.

“We must compete with other resource rich countries around the world for these job creating investment dollars,” Clement said on the floor of Coastal Steel.

Current joint-panel review environmental assessments are duplicating the process and allowing individuals to use the assessment to discuss irrelevant issues that delay projects from mining to oil and gas that create jobs.

“Before you know it it’s going to take a decade or more if the project is a viable project that we want to go ahead with it takes a decade or more to get to a stage where you can actually get it done. That’s inexcusable,” he said.

Instead the federal government wants one review per project with a two-year timeline. Clement ensures that the government will live up to its consultation obligations with First Nations. When asked about recent First Nations communities saying they haven’t been consulted or are even willing to die to stop the Ring of Fire development from going ahead, Clement said talks are just beginning. While the federal government takes the obligation seriously, it doesn’t give First Nations communities a veto he added.

“There’s going to be headlines here or there where somebody walks away from the table then marches back to the table,” he said.

“But at the end of the day we have to move ahead when these projects are virtuous and there has to be obviously a First Nations component to these things there always will be and at the end of the day we find ways where the private sector can work with First Nations can work with governments to ensure these projects can go ahead in a sensible manner.”

Clement said people like Mulcair are being reckless and irresponsible.

“There’s a lot of demonizing of this legislation but when you look at the future of our country we do need to continue to develop our natural resources,” he said.

MPP John Rafferty (NDP, Thunder Bay-Rainy River) said he has a lot of concerns over the Conservative plan.

“I get concerned when I see those kinds of processes being streamlined because you know what’s going to happen is they’re going to be streamlined to such a point that people are not going to have their say,” he said. “If it’s in your backyard I think you should have a say as to what happens.”

Rafferty said there has also been a lot of misinformation about his leader. The NDP just want to make sure that natural resource development is sustainable both environmentally and economically and that polluters should pay.