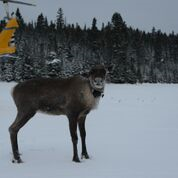 One of the caribou transferred to the Slate Islands in January, 2018 (MNRF)

One month after successfully relocating nine caribou from Lake Superior's Michipicoten Island to the Slate Islands to the north, the Ministry of Natural Resources and Forestry is moving more animals to a new home.

This time, the helicopter journey is southward.

MNRF biologists hope to complete the transfer this week of at least six animals to the more remote Caribou Island, where there are currently no caribou.

On Wednesday morning, a ministry spokesperson said the team was waiting for weather conditions in the area to improve before resuming the operation.

In January, eight cows and one bull were sedated, then airlifted to the Slate Islands near Terrace Bay to join the few bulls still living there.

The MNRF is monitoring them, and says the animals are doing well so far.

On Michipicoten Island, the survival of the caribou is threatened by wolves. It's estimated that the current population there is no greater than 100.

Biologists hope that transferring the animals to other islands will help ensure the survival of the Lake Superior caribou herd.

Michipicoten Island is owned by a U.S.-based charity, the Elizabeth Elliot Foundation.

The MNRF says the caribou relocation is being done in collaboration with the Michipicoten First Nation.