The mother of Levi Schaeffer said anyone who spoke to her son for more than 30 seconds would know he suffered from a mental illness.
Mar 10, 2011 6:38 PM By: Jamie Smith 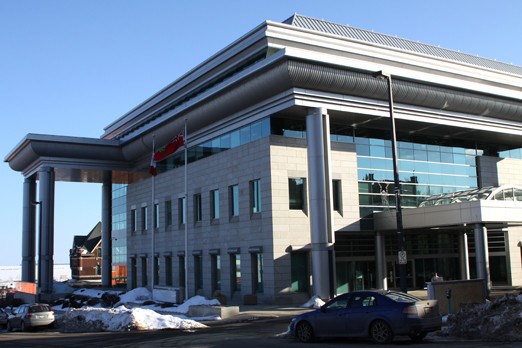 The governemnt building on Red River Road in Thunder Bay. (Jamie Smith, tbnewswath.com)
The mother of Levi Schaeffer said anyone who spoke to her son for more than 30 seconds would know he suffered from a mental illness.

Ruth Schaeffer spoke Thursday at the coroner’s inquest into the death of her son Levi, a 30-year-old man fatally shot by police in June 2009. The inquest into the man’s death began last week at the government building on Red River Road in Thunder Bay.

"I love my son very much but it was obvious," she told legal counsel to the Crown, Dan Mitchell, about her son’s mental illness.

Mitchell said Levi had several run-ins with police while on his way to Pickle Lake. While co-operative, Mithcell said Levi was flagged by police in small towns, such as Matheson, Ont., for exhibiting signs of mental illness.

"He did appear to have an animosity toward police," Mitchell said.

Levi Schaeffer was shot though the heart and killed by police near Osnaburgh Lake after two OPP officers suspected him of stealing a boat.

The five-person jury heard last Thursday how the OPP constable who fired the fatal shot said he feared for his life, as well as his fellow officer, when Levi Schaeffer allegedly pulled a knife and threatened them.

Ruth Schaeffer said during her testimony that her son always told her he would respect police if they did the same. She said her son was a gifted, bright man and a talented artist.

"He could draw or sculpt almost anything," she said.

Schaeffer lost touch with her son after he moved to Toronto from Peterborough when he was 19 to become a photographer. She eventually went looking for him and after two years, found Levi living under a bridge.

He was then diagnosed with schizoaffective disorder, panic and personality disorder.
He spent time in prison and Ruth Schaeffer said she didn’t think her son had much of a future until the last three years before his death.

She said her family had a love-affair with camping and would go on camping trips all the time. Levi Schaeffer decided that if he had a plot of land in the bush he could be happy.

"Away from radio, TV and lots of people he could be happy," She said.

Schaeffer started saving up money to buy her son some land. The last time she saw him alive was in March 2009 walking on a street in Peterborough.

"I just gave him a hug and told him I loved him," she said. "That was the last time I saw him."

Ruth Schaeffer said she believes part of the reason her son was near Pickle Lake camping was to look for land to purchase.

After Levi’s death on June 24, 2009, Ruth Schaeffer said she and Levi’s father, John, went to Osnaburgh Lake where the shooting happened.

"I needed to see where he spent the last few days of his life," she said.

Although police suspected Levi of stealing a boat, members of the community showed Schaeffer a walking trail out to the peninsula where the incident took place. Schaffer said based on camping experiences with her son, the trail would have been fairly easy for Levi to navigate.

"He would’ve been quite able to do that," she said.

Now a pastry chef, after her son’s death, Ruth Schaeffer said she had to quit her job at the Elizabeth Fry Society in Peterborough, which advocates for incarcerated women.

"I was quite traumatized by my son’s death," Schaeffer said. "I wasn’t in any shape to be of assistance to other people."

The inquest wraps up Friday with summations and recommendations.