Bruce Hyer has gone on tour to see how people feel about possibly transporting 50,000 tonnes of nuclear waste through their community.
0
Nov 12, 2012 12:29 PM By: Jeff Labine 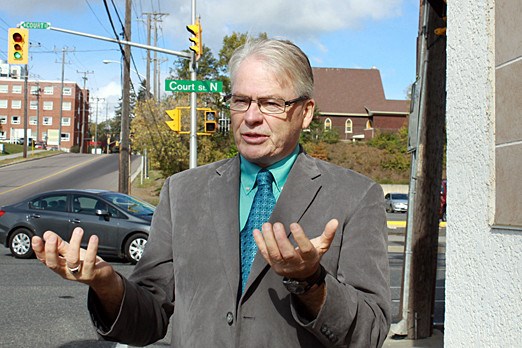 Bruce Hyer has gone on tour to see how people feel about possibly transporting 50,000 tonnes of nuclear waste through their community.

The independent MP for Thunder Bay – Superior North started his tour of northeastern Ontario with a stop in Oshawa on Thursday then moved to Parry Sound. Hyer then continued to Sudbury on Monday where he will hold a town hall meeting.

His final destination will be in Sault Ste Marie on Tuesday.

Hyer picked Parry Sound, Sudbury and Sault Saint Marie because of the potential impact a nuclear disposal site could have on them.

He said the Nuclear Waste Management Organization hasn’t had discussions with communities about a transportation route.

“It doesn’t matter where it is because we’re talking about 600 more trucks a year or 60 trains a year for decades to transport all of these materials and its high level nuclear waste,” Hyer said.

“That’s a lot of waste. Many people are surprised by the amount and the frequency of the trucks.”

The Nuclear Waste Management Organization is looking to finding a suitable spot for a nuclear storage facility. The multibillion-dollar infrastructure project will require a surface area of 250 acres for the buildings and a depth of 500 metres.

Hyer said he’s doing this tour on the transportation route because the NWMO has so far refused to do it.

The organization only held meetings in towns that were interested in being a host community and not in neighbouring communities that would be affected by the route, he said.

“What I am doing is not an adequate substitute by any means for the MWNO doing this in a more complete way,” he said. “I’m getting a sense of the general public’s feelings and what their concerns are and I’m also raising awareness.

"I’m hopeful that what it will do is to broaden the discussion and start a different kind of discussion. You can read a lot of reports but a first hand, live interaction I think is important. I’m listening more than saying. I’m not saying much other than the very basic facts."

Hyer plans to head back to Thunder Bay once he finishes his town hall meeting in Wawa.

Hyer then plans to hold another town hall meeting in Thunder Bay over the weekend, but likely on a different issue -- bringing Via rail back to the North.

That meeting is scheduled for Saturday at the 55 Plus Centre on River Street at 2 p.m.