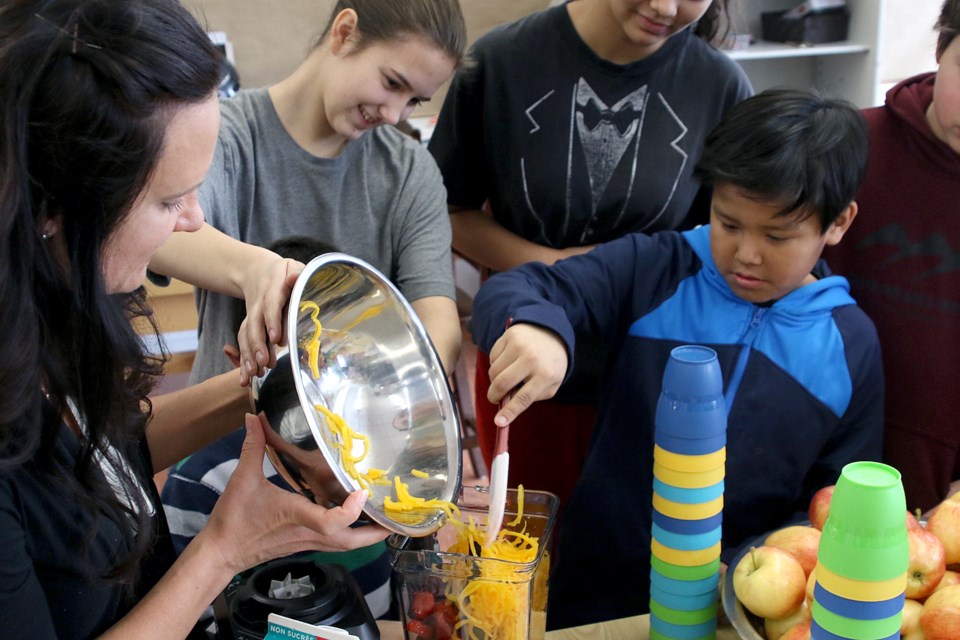 THUNDER BAY – Students at schools across Ontario’s northwest will now have access to even more healthy food options in the classroom.

The Thunder Bay District Health Unit on Thursday introduced the launch of the Northern Fruit and Vegetable Program into 87 elementary schools in the region, including schools on remote First Nations where access to fresh produce can be scarce during the winter months.

Athena Willoughby, a Grade 8 student at Alqonquin Avenue Public School, said the twice-a-week program will have a huge impact on children across the north.

“I like that it helps a lot of children who can’t bring healthy snacks to school and really can’t eat it. It helps a lot with high nutrition and proteins,” the 13-year-old said.

School-mate Connor Williamson, a Grade 5 student at the school who helped make a surprise smoothie whose secret ingredient was squash, said it’s easy to understand the benefits of the program, which first launched in 2006 in northeastern Ontario.

“Lots of people get to eat healthy food and a bunch of different new foods,” he said.

Both students have added sweet peppers to their diets since the program was brought to their school last month.

Both also said they plan to bring the lessons learned home with them, to encourage their families to eat a little healthier and choose snacks that are high in nutrition rather than ripping open the nearest bag of junk food.

“Definitely,” Athena said. “It’s more healthy than chips, that’s for sure. And it gives you more energy to start your day and makes your brain move more.”

Janet DeMille, the medical officer of health at the Thunder Bay District Health Unit, said studies prove that people in general across the north don’t always eat the food that’s best for them. Access to healthy food isn’t the issue for many, but making the right choices is.

“We know from our data that we don’t have very good rates of people consuming what the recommended servings of healthy fruits and vegetables every day. And that includes children,” DeMille said, explaining why they wanted to launch the program in Thunder Bay and across the region.

“That’s a problem, because when we’re not adopting those healthy behaviours, it puts us at risk down the road of poorer health and chronic diseases.”

Starting kids off young, introducing them to a variety of different foods, can help form healthy eating habits for life.

Paid for through the Ministry of Health and Long-Term Care, the program aims to use Ontario produce when available, distributed through the Ontario Fruit and Vegetable Association. It began regionally last May in road-accessible First Nations communities.

The 16,000 students taking part will also receive educational resources to learn the benefits of healthy eating and remaining physically active.