THUNDER BAY – Even though negotiations are still ongoing locally, public high school teachers are starting to reach a breaking point.
May 8, 2015 5:15 PM By: TbNewsWatch.com Staff 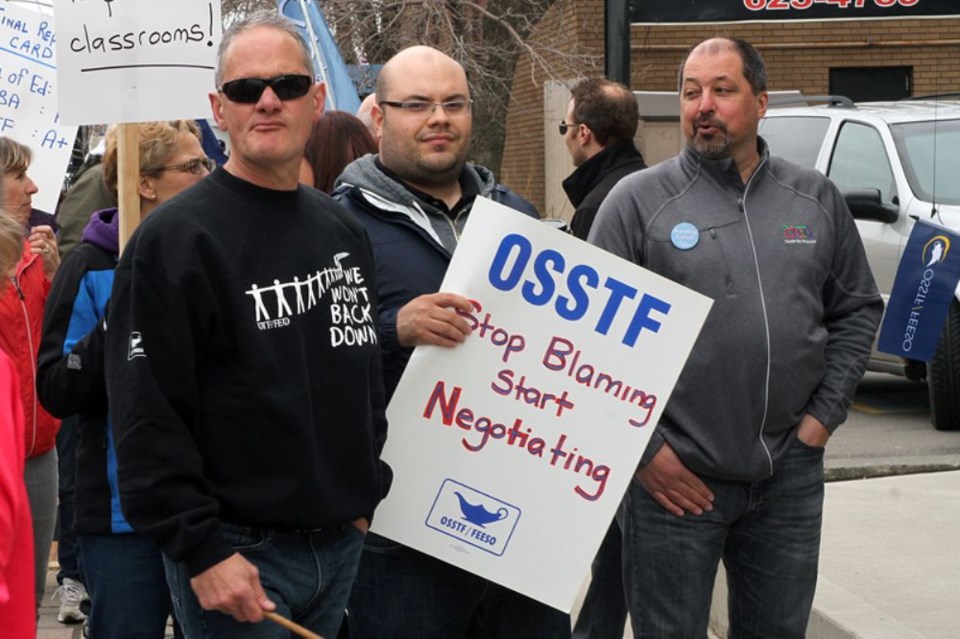 THUNDER BAY – Even though negotiations are still ongoing locally, public high school teachers are starting to reach a breaking point.

“Things are reaching a boiling point. We’re frustrated locally, we’re frustrated provincially. We really need to light a fire under this as the Premier stated and get things moving,” Caccamo said in an interview.

“It’s time the parties sat down at both levels, negotiated a deal that is fair and brought this process through to a resolution.”

Crowds of teachers and support staff gathered outside the offices of both Gravelle and fellow city MPP Bill Mauro (Lib., Thunder Bay-Atikokan) after school ended.

The Lakehead District School Board teachers are in a legal strike position, requiring only five days’ notice before they could walk off the jobs. The Lakehead board is one of seven that received notice for conciliation in March.

Teachers at school boards in Durham, Peel and Sudbury are already on the picket lines. In addition to Thunder Bay, teachers with the Ottawa, Halton and Windsor school boards are also in a legal strike position.

Caccamo said the local negotiation team is scheduled to meet with the board for three days next week.

“We’re very optimistic some meaningful talks can happen,” he said.

“Our expectations are that the talks will be fair and my members who have been denied an opportunity to negotiate for seven years will be able to secure some meaningful gains and workplace protections they’ve been demanding.”

This is the first round of negotiations since the provincial government attempted to clarify the negotiating process by outlining responsibilities of local and central bargaining tables.

The central table, which is composed of the OSSTF, Ontario Public School Boards Association and the government, is said to be at an impasse.

Even though local talks continue the holdup at the central table limits the amount of progress that could be achieved.

“There’s no question my members are frustrated by what’s happening provincially. We all need to realize some of the most significant issues are provincial table issues so the stakes are very high at that table,” he said.

Earlier Friday the Elementary Teachers Federation of Ontario announced they would be implementing a work-to-rule campaign across the province, effectively nixing all job-related duties other than teaching.

Caccamo ruled out adopting a similar campaign in city high schools, saying their union is in favour of an all or nothing approach.

“I think our strategy is very clear that we will not be looking at a scaled implementation of strike action. If things boil over we will take (full) strike action,” he said.