Alex Burton says it’s time to rebuild the Liberal brand across Canada. The British Columbia lawyer thinks he’s the man to get the job done, despite never having served in public office.
Oct 20, 2012 12:01 PM By: Leith Dunick 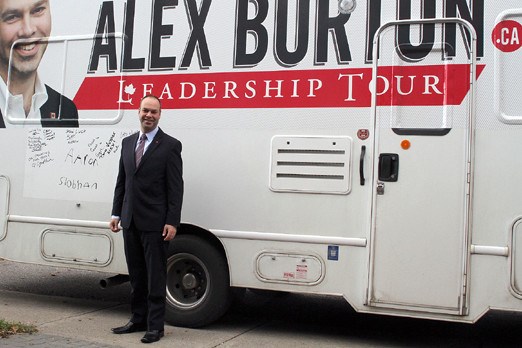 Liberal leadership hopeful Alex Burton is bringng his message of change to the cities between the cities. (Leith Dunick, tbnewswatch.com)

The British Columbia lawyer thinks he’s the man to get the job done, despite never having served in public office. The 44-year-old is on a cross-country trek to show Canadians why Liberals need an alternative to the Trudeau brand name leading a party decimated by the Conservatives and NDP in the 2011 general election, reduced to third-party status for the first time in history.

Burton, president of the Vancouver Kingsway riding association, said the party must prove itself all over again to the entire country, not just pockets in the east.

His platform includes building a just and secure society, democratic reform, establishing Canada’s place in the world, building a country of opportunity and, most importantly, revitalizing and re-energizing the Canadian economy.

Being an outsider to Ottawa’s political machine shouldn’t hurt his chances, Burton said on Friday, during a brief stop in Thunder Bay to promote his candidacy.

“People talk about not wanting career politicians all the time. If we’re going to bring new voices and new approaches to Ottawa, there has to be avenues to do that. Why am I doing this? I’ve been a Liberal for quite a while now, and there’s been a lot of change in our party over the last several years.”

When he realized a leadership race to replace Michael Ignatieff at the party helm, he said he asked himself who among the suspected front-runners was going to be the voice that sparked party renewal, who would advocate for the things he believed the party needs to do. And who would step up and actually do those things, not just for the party, but for the country as a whole.

“With respect to other names that have been thrown around, I didn’t see that voice. I didn’t see that person who is going to bring the values and the principles and the ideas that I think we must have as Liberals to engage Canadians and rebuild our credibility, quite frankly.”

It’s a fundamental change that’s needed, he said. Yes, Stephane Dion and Ignatieff failed to capture the imagination of voters in recent elections, but it’s much more than that.

“We have to recognize that we need to do better and we need to change the way the Liberal party does business. We need to engage with Canadians in every region of the country,” said Burton, a self-described small ‘L” liberal who holds a law degree from the University of Victoria.

“I am from Western Canada and it’s a place where the Liberals have not fared well. We need to make sure that our ideas, our message, is one that resonates with Western Canadians.”

Burton says he believes in individual hard work, and reaping the reward for that hard work. But he also believes that there is a time and place to help your neighbour when they need it.

For more information on Burton, visit his website at www.alexburton.ca.

The Liberal leadership convention is scheduled for April 14, 2013 in Ottawa.