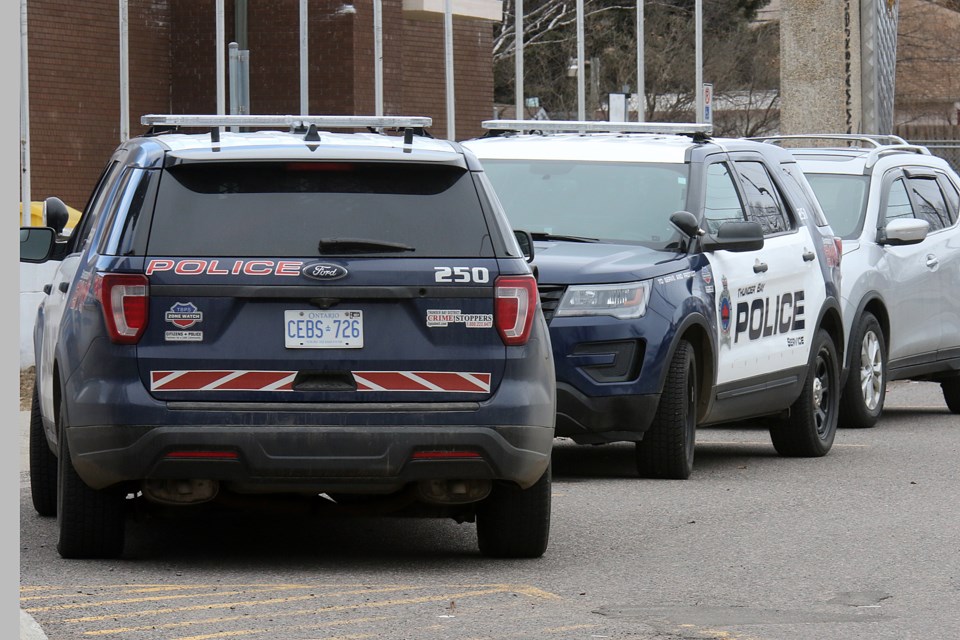 Police on Thursday, April 11, 2019 investigate the 11th threat made against Hammarskjold High School during the 2018-19 school year. (Leith Dunick, tbnewswatch.com)

The police service, which did not provide any further information, said the investigation remains ongoing.

The north-side high school has had 14 anonymous Crime Stoppers threats directed at it during the academic year, which has resulted in the school being closed for 12 days.

Thunder Bay police last week confirmed they had requested support from the OPP to assist with the investigation. Investigators said the threats have involved possible shootings, suspicious packages or bombs.

Hammarskjold school council chair Cheri Lappage said she breathed a huge sigh of relief when she learned the news.

"I'm so relieved to find out police have arrested two suspects and I'm hopeful that police have the right people and we'll see an end to this. We can't thank the TBPS enough for their efforts throughout this," she said.

"At the end of this, I hope we'll be able to understand why it was Hammarskjold that was targeted and that the people responsible will get the help they so clearly need."

The threats have nearly exclusively targeted Hammarskjold though one incident earlier this month also included Superior Collegiate and Vocational Institute, prompting that school to also be closed for one day.

The Hammarskjold School Council held a public information meeting Tuesday night, where more than 200 parents and students attended and voiced their concerns and frustrations. That gathering came less than a week after another meeting scheduled for Hammarskjold had to be cancelled due to another threat.