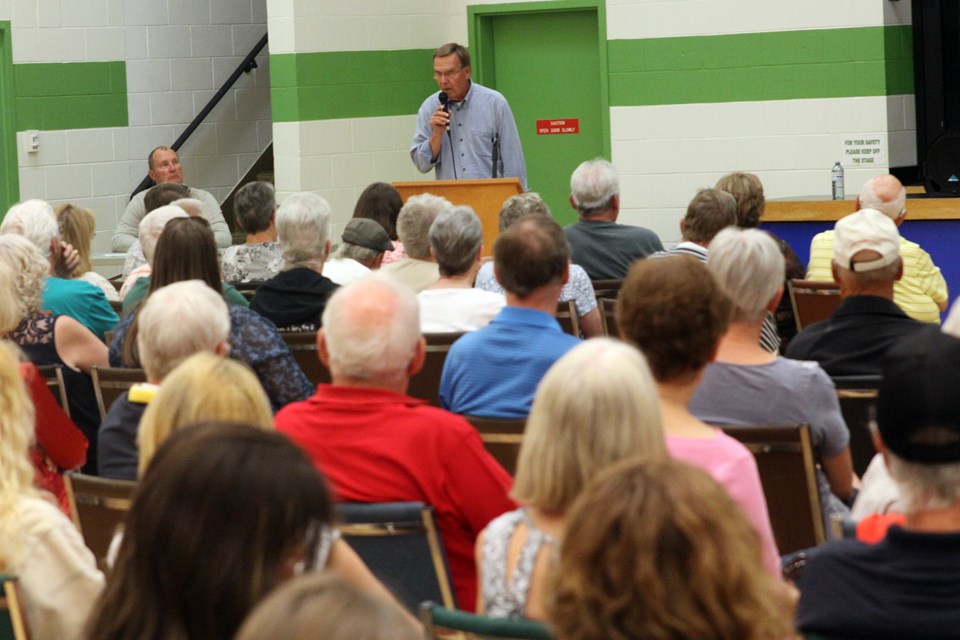 Coun. Brian McKinnon (Red River) speaks at a meeting hosted by the Boys and Girls Clubs of Thunder Bay about the proposed transitional residence on Junot Avenue. (Matt Vis, tbnewswatch.com)

THUNDER BAY – A controversial proposed transitional housing project that would be located on Junot Avenue is generating fierce neighbourhood opposition.

About 200 passionate residents filled the Boys and Girls Clubs of Thunder Bay gymnasium at their Windsor Street building at a Thursday evening meeting, with the majority vocally opposing the development.

Ontario Aboriginal Housing Services, which has acquired the parcel of land between the Boys and Girls Clubs building and the Superior North EMS headquarters, is proposing to build a 58-unit facility for homeless Indigenous individuals between the ages of 18 and 29 that would have wraparound services provided by the Thunder Bay Indigenous Friendship Centre.

The meeting, which was jointly hosted by Coun. Brian McKinnon (Red River) and Coun. Albert Aiello (McIntyre), comes about three months before a zoning bylaw amendment application that would be required to move forward with the project is expected to come to council in September.

Aiello, who is also the executive director of the Boys and Girls Clubs of Thunder Bay, said the Windsor-Picton-Blucher area is not the right location for the facility.

The neighbourhood in the last year has been the scene of multiple violent, gang-related incidents, including a standoff and a shooting where a gunshot was mistakenly fired into a family home. It's also believed to be a neighbourhood where drug dealing is prevalent.

“For this transition home to be successful, you can’t have these kind of temptations right outside your door. That’s very concerning for us and very concerning for the residents that live here,” Aiello said, rejecting the notion that his opposition goes beyond just having the facility in his organization's backyard.

Aiello, who also raised concern about the development’s proximity to the Boys and Girls Clubs building as well as nearby schools, said there was no consultation done by city administration with his organization or the school boards.

Former city councillor Paul Pugh, who supported the project last year, said there will be no cost to the city or the Thunder Bay District Social Services Administration Board with Ontario Aboriginal Housing Services paying for the construction and ongoing maintenance on the buildings.

“We have a very large, very significant, issue with homelessness and with people needing housing,” Pugh said. “This would, not solve it, but it would take a significant chunk out of the problem.”

Brenda Prpic, who has lived on Blucher Street for 46 years, said there are already more than 270 subsidized housing units within the immediate vicinity, arguing that is more than enough for the neighbourhood.

“When (people) hear (Windsor-Picton-Blucher), they think they’re living in a ghetto,” Prpic said. “If you’re going to 60 units more … the value of my property keeps going down and down and down.”

The previous term of city council last fall approved granting a portion of the land worth an estimated $220,000 on Junot Avenue for a 20-unit facility.

Last month, council voted to sell the property for $320,000, deducting the portion that had already been gifted and a $25,000 non-profit discount from that sale price, nearly tripling the number of units that would immediately be constructed. Both Aiello and McKinnon voted against the sale of the land.

In June 2018, four parcels of city-owned surplus land were identified as potential locations. In addition to the Junot Avenue site, property on Huron Avenue, the corner of Hudson Avenue and Shuniah Street and Empire Avenue were considered.

Both Aiello and McKinnon questioned why the Junot site was picked over the other three, also suggesting the former city-operated Dawson Court long-term home on Algoma Street could be a suitable location.

Multiple people who spoke in favour of the project, including Roots to Harvest executive director Erin Beagle when she tried to acknowledge traditional First Nations lands, were jeered and booed by audience members while they attempted to speak.

“This is a place people can go to because they don’t have access to housing or affordable housing. This transitional housing project is about helping people who don’t have a place to live or lack the means to make that happen,” Daniel Hannah said.

“I’m really concerned about how this whole conversation is framed, as if we don’t really care about those people.”