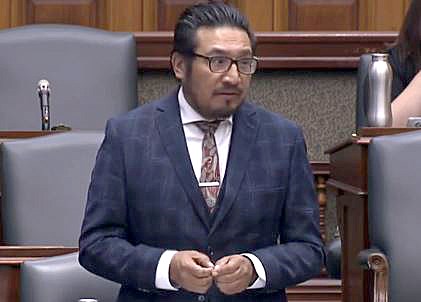 Minister of Indigenous Affairs Greg Rickford announced Tuesday the province would provide $10 million over three years to support an Indigenous-led process, weeks after the bodies of 215 children were discovered in an unmarked grave at the former Kamloops Indian Residential School site.

According to MPP Sol Mamakwa, who represents the northern riding of Kiiwetinoong, that announcement came despite a commitment from Rickford to brief him beforehand.

The minister's Kenora-Rainy River riding borders Kiiwetinoong to the south.

Mamakwa’s office said the commitment came during a private conversation Saturday following Question Period, during which Mamakwa had pressed the government to provide resources and ensure investigations were led by residential school survivors and Indigenous communities.

“He said to me, we’re doing an announcement very shortly, and told me that I would get briefed before the announcement,” Mamakwa said Wednesday.

Instead, he said he was surprised by Tuesday’s announcement, receiving an email during the event inviting him to join a briefing on Wednesday, which he opted not to attend.

Rickford's office did not respond to a request for comment Wednesday.

There are 18 residential school sites across Ontario, while Rickford said Tuesday there could be unmarked burial sites elsewhere that are associated with the schools, the last of which closed in 1991 in Ontario.

The final report of Canada's Truth and Reconciliation Commission found students at residential schools died at a significantly higher rate than children outside of the system. It identified 3,200 student deaths across the country, but concluded many others went unrecorded.

The federal government declined a 2009 request from the TRC for additional funding to more fully investigate the question of student deaths at residential schools.

Mamakwa said he had hoped to be involved in a non-partisan government approach to the issue, as the sole Indigenous representative in Ontario’s legislature, and a former residential school student himself.

He has been in recent discussions with Indigenous experts around the best way to move forward, he said.

“The work about to begin in our communities is a very, very sacred and spiritual responsibility for us as Anishinaabe people,” he said. “I think it’s very disrespectful to play politics on it, to try to jump ahead and [tell] people that they’re doing something. Yes, we welcome that, but don’t play politics on it.”

The province’s announcement was welcomed by groups including Nishnawbe Aski Nation and the Chiefs of Ontario.

Mamakwa agreed it’s a good step forward, but said he was concerned the process was politically motivated, and suggested the amount of money committed hadn’t been determined in consultation with Indigenous groups.

“That $10 million over three years, with 18 former residential schools, it’s a drop in the bucket,” he said.

The process of investigation could take a decade or more to fully conclude, Mamakwa projected.