Rusnak Around the Riding: Year in Review

With 2017 coming to a close I would like to use this opportunity to reflect on the highlights of this past year.
0
Jan 3, 2018 11:01 AM By: Community Submission 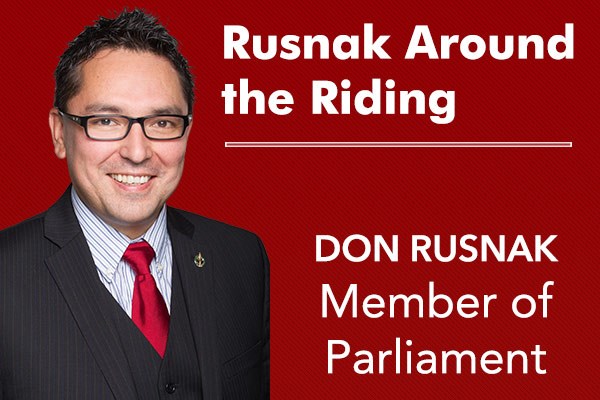 With 2017 coming to a close I would like to use this opportunity to reflect on the highlights of this past year. As of October 2017 I have had the privilege of serving as MP for Thunder Bay—Rainy for two years; it has been an amazing experience advocating for our region in Ottawa and being part of a government that has been committed to creating real change across our country.

Nationally we have worked hard to strengthen the middles class and support those working hard to join it by enhancing the Canadian Child Benefit (CCB), Working Income Tax Benefit (WITB), Maternity, Parental and Care Giver benefits, investing in the Canada Summer Jobs Program, and launching the first National Housing Strategy of its kind.

We have seen unemployment in Canada reduced to 5.9%, the lowest it has been in 10 years, and we have committed to cutting the small business tax from 11% to 9% by 2019 while working on a fairer tax system that ensures all Canadians pay their share.

Our government has also taken into consideration the health of Canadians by negotiating a new Health Accord with the Provinces that includes new targeted federal funding over 10 years for investments in home care and mental health care with $4.2 billion for Ontario specifically.

We have maintained our commitment to prioritizing infrastructure by investing more than $180 billion over 12 years. This includes targeted investments in public transit, as well as green and social infrastructure, to create good jobs, better our communities, and grow the middle class.

Our government has also made progress in establishing a renewed relationship with Indigenous People across Canada.  As recommended in the Royal Commission on Aboriginal Peoples, our Prime Minister has created two Ministries to further advance the relationship, Crown-Indigenous Relations and Northern Affairs and Indigenous Services. I was honoured to receive a call from the Prime Minister in August of 2017 asking that I take on additional duties and serve as the Parliamentary Secretary to the Minister of Indigenous Services. I look forward to working closely with Minister Jane Philpott on important issues such as clean drinking-water, housing, and infrastructure in First Nations communities across the country.

Locally we have seen real change come to Thunder Bay—Rainy River via federal investments in clean water and waste water in Thunder Bay, Fort Frances, Fort William First Nation, Atikokan, La Vallee, and Conmee. I also had the honour of announcing $13 million in federal infrastructure funding for the construction of a new international bridge between Rainy River, ON and Baudette, MN, a joint project with our US neighbours.

We joined the province in opening the first affordable housing unit in Thunder Bay in 27 years, while also announcing federal funding for affordable housing across Northwestern Ontario. Additionally, we saw the reopening of the Thunder Bay Region Veterans Affairs Office. The VAC office will serve as an important hub for veterans across the riding and I am extremely grateful to those who advocated for its reopening.

Finally, with the assistance of municipalities and community groups across the region we were able to announce $926,185 for 16 FedNor Canada 150 Community Infrastructure Projects across the riding including upgrades to the Atikokan Wellness Centre, the Thunder Bay Conservatory, the Fort Frances Museum, and an additional $100,000 towards the restoration of the Chippewa Park Carousel. These are just a few of the many projects in our region that have received federal support.

For my family the biggest event in 2017 has been the birth of our second son on Father’s Day of all days! As I enjoy some quality time with my growing family over the holidays, I want to take a minute to wish you and yours a wonderful holiday season and a Happy New Year! I look forward to continuing to act as your voice in Ottawa and advocating for change across our riding and the country.