MV Hanse Gate edged out MV Ludogorets by half an hour for the honour of the first ocean-going vessel to arrive in port this shipping season.
0
Apr 19, 2019 1:29 PM By: Leith Dunick 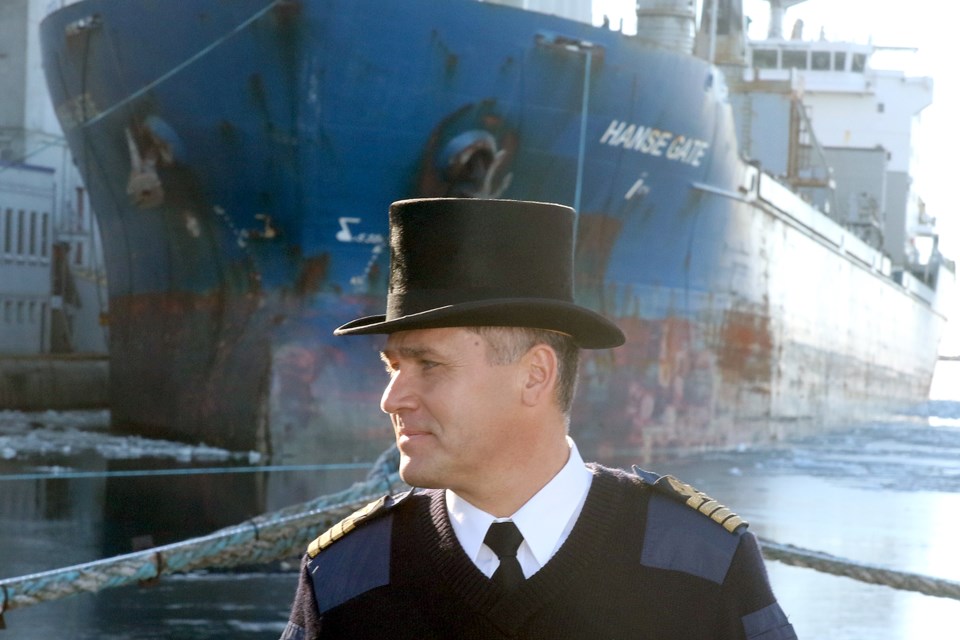 Capt. Sergey Kachnov was honoured on Friday, April 19, 2019 in the annual top-hat ceremony recognizing the first ocean-going vessel to arrive in port for the shipping season. (Leith Dunick, tbnewswatch.com)

THUNDER BAY – It was a race for the top hat between a pair of ocean-going vessels.

In the end, Capt. Sergey Kachnov of MV Hanse Gate captured the crown, edging out MV Ludogorets by about a half an hour on Thursday morning.

Kachnov, who has piloted the ship for six years, said it was an honour to be awarded the top hat, a tradition at many maritime ports throughout northern North America.

“This is very nice and I’m really surprised,” he said on Friday morning, the sun just beginning to peak its way over the Richardson Port Terminal as the ship’s hatches were loaded with Canadian wheat bound for Algeria, a trip he estimated will take between two and three weeks to complete.

“I’m very pleased because this is the first time in my life for this ceremony. I did not expect my vessel would be first in this port this year.”

It wasn’t smooth sailing to get to Thunder Bay, he added.

“There was a lot of ice in April in the lake. But we’re here and loading is in progress.”

The captain and his first engineer were given ceremonial gifts from the city, presented by Current River Coun. Andrew Foulds.

Kachnov also continued a long-standing tradition, signing the inside of the top hat, adding his signature to dozens of other captains who had come before him.

He added the ice made it tough travels, adding about six hours to the final leg of the journey from Sault Ste. Marie, normally an 18-hour trek.

“But with the help of the Canadian ice breakers they made it here unscathed and got into the berth. We started loading yesterday and we should be finished later this evening and on our way to Algeria,” he said.

Intersection closure scheduled for Wednesday and Thursday
May 25, 2020 4:27 PM

Thunder Bay hospital targets June 1 for elective surgery resumption
May 25, 2020 3:52 PM
Comments
We welcome your feedback and encourage you to share your thoughts. We ask that you be respectful of others and their points of view, refrain from personal attacks and stay on topic. To learn about our commenting policies and how we moderate, please read our Community Guidelines.
The latest on COVID-19 Local and global updates →
Support local: Delivery, takeout & more
View local businesses