Dodgers and Athletics kicked off the 2021 campaign at Baseball Central on Sunday after scrambling to put teams together.
Jul 18, 2021 8:55 PM By: Leith Dunick 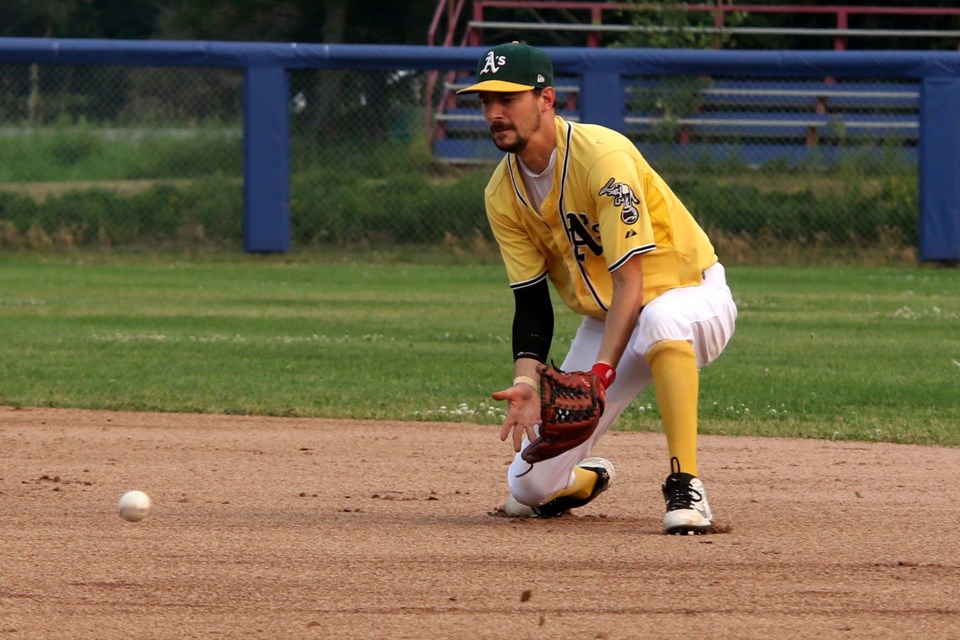 THUNDER BAY – Put 'em in coach, they're ready to play.

After a year-and-a-half on the sidelines, there might be a little rust to shake off when the Thunder Bay Senior Baseball Association kicked off its abbreviated 2021 campaign on Sunday night at Baseball Central.

But as soon Jon Brattenger, the starting pitcher for the defending champion Galaxy Lanes Athletics, delivered his first pitch, high-level baseball was back and the chase for a championship was on.

It's good to be back said Brennan Tienhaara, the Athletics lead-off hitter and player-manager, admitting he'd yet to take a cut in the batting cage in the rush to put a team together and get ready to defend their title.

“Hopefully we can start up the season like we ended the last one, with a win. It's good to get back after a year-and-a-half, or longer,” Tienhaara said.

The toughest part in between was just not knowing.

Last year the season was wiped out by COVID-19, and as case raged in Thunder Bay in early spring, there were no guarantees games would be played in 2021.

But as vaccination rates soared and case counts dropped, Ontario on Friday moved into Step 3 of its reopening plan, which gave the TBSBA the go-ahead to start playing.

As soon as the province said it was OK, Tienhaara said he started scrambling to find players.

“It was kind of a bummer last year not getting to play or do much at all. But we ended up getting quite a few guys together for the team this year, so it should be a good year. We're going to win again. I think it's going to be a lot of hitting. We have a lot of good hitters on our team,” he said.

It wasn't easy at first, he added.

“At first it was kind of hard. Not many guys were answering right away, but we got more and more,” Tienhaara said.

John Ritchie, manager of the Daytona Dodgers, who came up short against the Athletics in the 2019 final, said it's been a long wait and he's glad it's finally over.

“It's a joy to be back. We missed all of last year and it's killing us. We're used to playing every summer. It's time. It's time to get back. Everybody's looking forward to it,” Ritchie said.

Like Tienhaara, Ritchie had to race to put together a squad, a team that includes former Thunder Bay Border Cat Chris Toneguzzi, drafted by the Pittsburgh Pirates in 2002 and the Milwaukee Brewers in 2006.

It's a veteran team, Ritchie said, scattered with a mix of youth thanks to the arrival of Jason Varey and Ethan Willmore from the Thunder Bay Lakers.

“You keep replenishing your players and they look good. They're going to help us,” Ritchie said of his two newest additions.

The regular season will run through Aug. 30, with playoffs set to begin on Sept. 1, a best-of-three play-in between the fourth- and fifth-place teams.

Other teams in the hunt this year include the Play It Again Sports Lakers, Bennett's Bakery Bombers and the Boston Pizza Red Sox.