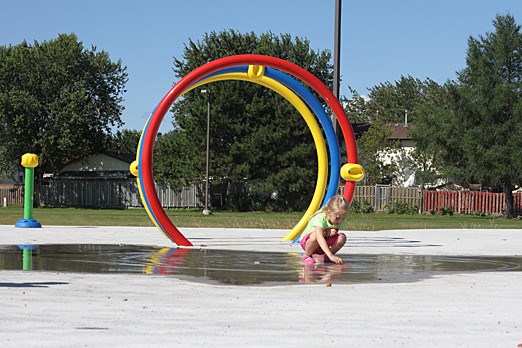 Langen started her daycare business in July and learned that the city planned to open the nearby splash pad this summer. Her proximity to the promised splash pad was part of her business’ promoted competitive advantage, and she hoped it could help attract new clients.

But Langen’s hopes of promoting her location based on a new splash pad were dashed when a permit problem forced the facility to delay its Canada Day opening.

“I was kind of disappointed because to me it looks ready and we’ve been looking at it being built for a year and the children were really excited,” she said.

“Right now we’re using the sprinkler in the backyard, which is fun but nowhere near as exciting as the splash pad would be for them. Summer is almost over and we missed the hottest days of the year and it is kind of disappointing because I don’t think it would take very much to get it running.”

The city’s co-ordinator for Park Planning Werner Schwar said the contractor ran into problems getting plumbing permits and the issue is taking longer than expected to get resolved.

He said the contractor was required to take out a plumbing permit in order to connect the pad to the city’s service.
The city budgeted about $300,000 for the splash pad but the contractor will cover any additional costs caused by the delay.
Schwar said it’s been a frustrating experience.
“Unfortunately, the contractor has not submitted his drawing yet to the city so that’s sort of out of my hands,” Schwar said.

“With only two weeks left in the summer I have my doubts that it will be operating before Labour Day. We do have to have it running at some point so we can have staff trained on it. Then we will have to winterize it.”

Once the contractor has filed his paperwork with the city, it will go through the proper procedures in order to have it implemented, he said.
He said that putting up a splash pad is a specialized profession, which is why the city hasn’t found someone else. He added that the contractor has had experience in constructing splash pads.