Teen, teacher say it's important for youth to remember the importance of Canada's contribution to victory in the First World War.
Apr 1, 2017 2:23 PM By: Leith Dunick 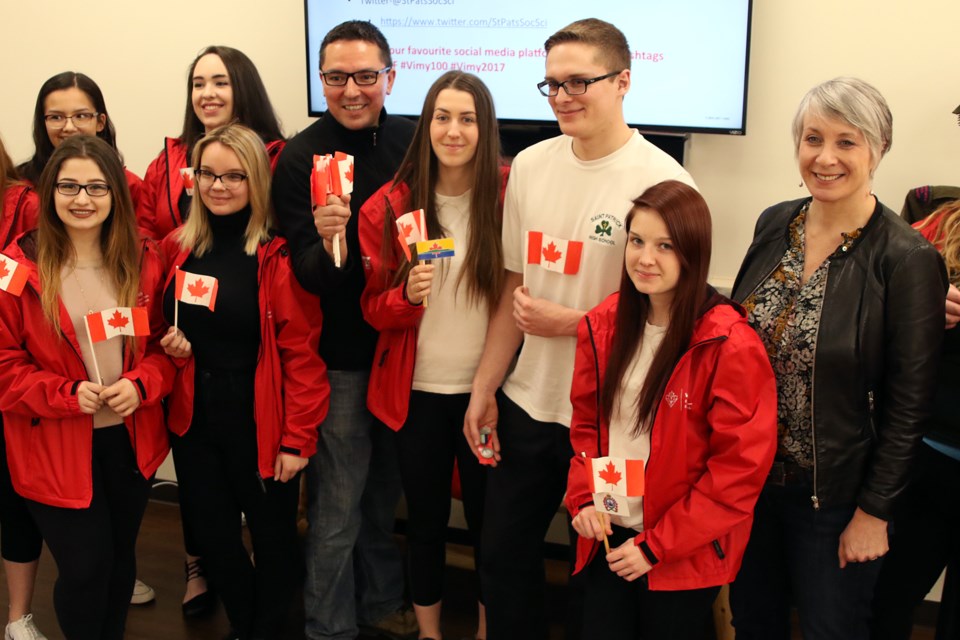 THUNDER BAY – Amy Osmulski calls the opportunity to be in France next week for the 100th anniversary of the Battle of Vimy Ridge a once-in-a-lifetime experience.

The St. Ignatius High School student is one of dozens of local teenagers from her school, as well as St. Patrick and Hammarskjold high schools who will be making the trip overseas for the April 9 ceremony commemorating Canada’s most memorable First World War battle, often described as a defining moment for the fledgling 50-year-old nation.

More than 15,000 Canadian troops took part in the 1917 battle, storming the Germans along the front in a four-day battle that cost 3,598 Canadians their lives and wounding 7,000 more.

It was the first time all four Canadian divisions attacked together as one, and its success led the French government in 1922 to cede Vimy Ridge to Canada in perpetuity.

“It’s so difficult for me to put into words the feeling I have. I’m excited, I’m proud and I cannot wait for April 9,” the 17-year-old Osmulski said.

The attack at Vimy Ridge began more than eight decades before the Grade 12 student was born, but it stands out to her as one of the most important moments in Canadian history.

It should be remembered and celebrated, Osmulski said.

“It’s super important. It matters. This is Canadian history. I am a Canadian citizen and what they’ve done for us, it’s needs to be recognized and we need to remember that,” she said. “That’s not something we can forget about.

“So yes, I’m 17 and it did happen a long time before I was born, but this is our history.”

“It’s one thing to teach history, but to actually physically be able to touch history is very important,” he said.

“And I think when you have an event like the Battle of Vimy Ridge, which was such an important milestone in Canadian history, and it’s a big part of who we are, and the fact that it coincides with the Canada 150 celebrations, I think it really reinforces who we are as Canadians and really gives a real sense to the event.

It also demonstrates how important it is to remember those who sacrificed their lives to help win the battle.

MP Patty Hajdu (Lib., Thunder Bay-Superior North) said reading about stories of famous battle in history books is one thing. Being there is something more altogether.

“These were very young men, generally. These were folks who were not much older than these kids – 19-year-olds, 20-year-olds – away from home, many for the first time, sacrificing on behalf of their country,” Hajdu said.

“You can only imagine how lonely and scared they might have been and how frightening the experience must have been.”

Students will attend the 100th anniversary celebration, visit battle sites and graveyards where fallen Canadian soldiers, including local ones, are buried. They’ve been tasked to research a number of soldiers who have died and seek out their graves.

The Vimy Memorial, unveiled in 1936, stands for the 11,285 Canadian soldiers killed in France who have no known graves.