Alexandria Szeglet added a strip of green tape to her St. Patrick High School uniform Thursday with the word “choice” written on it and was sent home for the day after refusing to take it off.
0
Mar 10, 2011 6:06 PM By: Jodi Lundmark 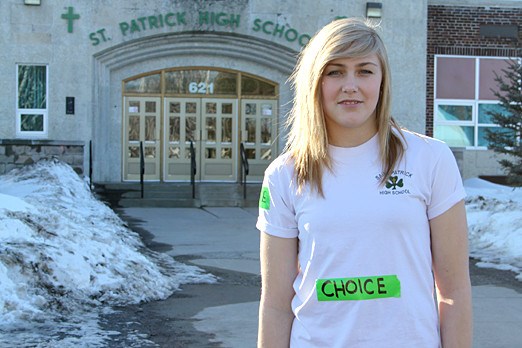 Grade 10 St. Patrick High School student Alexandria Szeglet stands in front of the school she was sent home from Thursday after wearing a pro-choice message on her uniform. (Jodi Lundmark, tbnewswatch.com)
Alexandria Szeglet added a strip of green tape to her St. Patrick High School uniform Thursday with the word “choice” written on it and was sent home for the day after refusing to take it off.

The Grade 10 student wore the green tape in response to a pro-life event at the school, where some students wore a red piece of tape with “life” written on it and didn’t talk for the day to display their belief in the injustice of abortion.

“I respect the Catholic beliefs and I respect everything the school is going for,” said the 15-year-old Alexandria. “I wanted to show my opinion whether it was a Catholic belief or not.”

After handing out at least 25 pieces of the green tape to fellow students, Alexandria was told to take off the tape or speak to someone in the school’s office.

“I talked to the office and they told me it wasn’t a schedule event so I had to take it off or go home and then I went home,” she said. “I did it because it was what I thought was right.

“I think everyone should have a right to show their opinion and do what they need and what they want instead of being told that no you have to keep the baby instead of doing what you feel is right for yourself.”


While the school sent Alexandria home, her message continued to spread.

Phone calls into the newsroom claimed that as many as 35 students were issued two-day suspensions, while another 100 were sent home for the day for wearing the green “choice” tape on their uniforms.

John de Faveri, Thunder Bay Catholic District School Board director of education, disputes those numbers. He said about 12 to 15 students were sent home from the school for the day while another two or three were issued two-day suspensions.

The students who were sent home for the day were not removed from school for wearing the sticker, but for not taking it off, he said. Meanwhile, students who were issued two-day suspensions received that discipline after they refused to remove the stickers and began using abusive language toward school staff.

“On the issue, pro-life is part of the Catholic stand,” said de Faveri during a phone interview with Dougall Media Thursday afternoon. “The pro-choice students were not appropriate in the context of a Catholic school.”