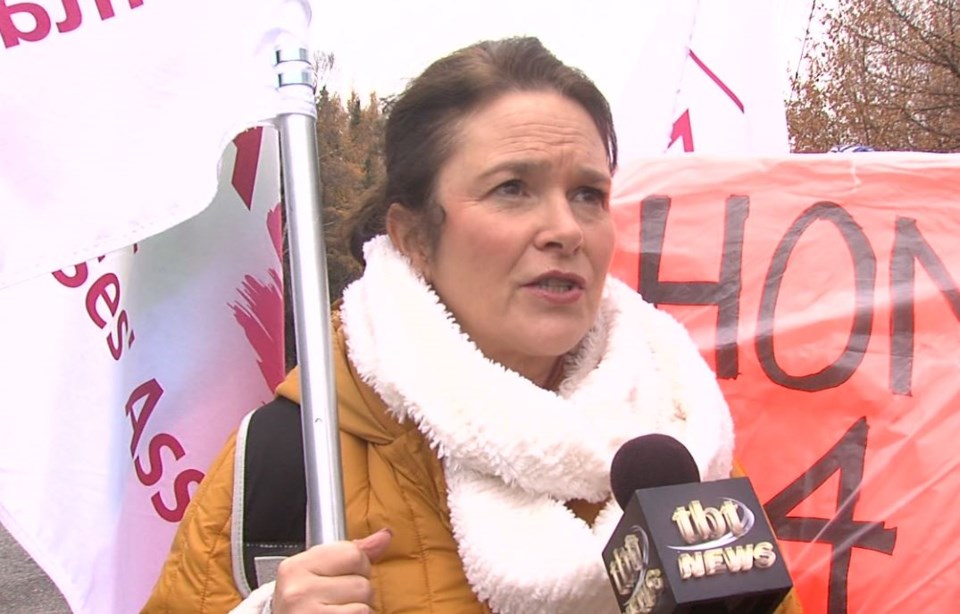 THUNDER BAY — Negotiators for striking public health nurses in Thunder Bay booked a hotel room Monday afternoon, and waited to see if management would show up.

"Our whole negotiating team was there...Two representatives from the employer did come, which did surprise me," Bridgman said.

She said TBDHU officials took the proposal back to the health unit, and that the union expects a response within a few days.

"There was no negotiations, just a meeting to pick up the offer...They couldn't really give an indication on whether [TBDHU] would be willing to move, on their part."

As of late Monday afternoon, the health unit had not issued any statement about what took place at the meeting.

Close to 60 nurses went on strike on October 16, looking for an increase in their wages which they say are the lowest among public health nurses across Ontario.

Last Friday, TBDHU issued a rare public statement, saying it had offered pay hikes and improved benefits without asking the Ontario Nurses Association bargaining unit for any concessions in return.

TBDHU also said it was still waiting for a counter-proposal.

In another development Monday, the president of the Canadian Federation of Nurses Unions, Linda Silas, joined the strikers on the picket line.

Silas said she felt it was important to come to Thunder Bay to show support and possibly provide some impetus toward a settlement.

According to a union official, 16 nurses have left their jobs at the health unit over the past three years.

Video: April 8, 2020: Outbreak grows
Apr 9, 2020 11:51 AM
Comments
We welcome your feedback and encourage you to share your thoughts on this story. We ask that you be respectful of others and their points of view, refrain from personal attacks and stay on topic. To learn about our commenting policies and how we moderate, please read our Community Guidelines.
The latest on COVID-19 Local and global updates →
Support local: Delivery, takeout & more
View local businesses