Police released additional details regarding the nature of threats against Hammarskjold High School while students grow increasingly frustrated with the loss of school days and want whomever is responsible to stop.
0
Apr 2, 2019 3:56 PM By: Doug Diaczuk 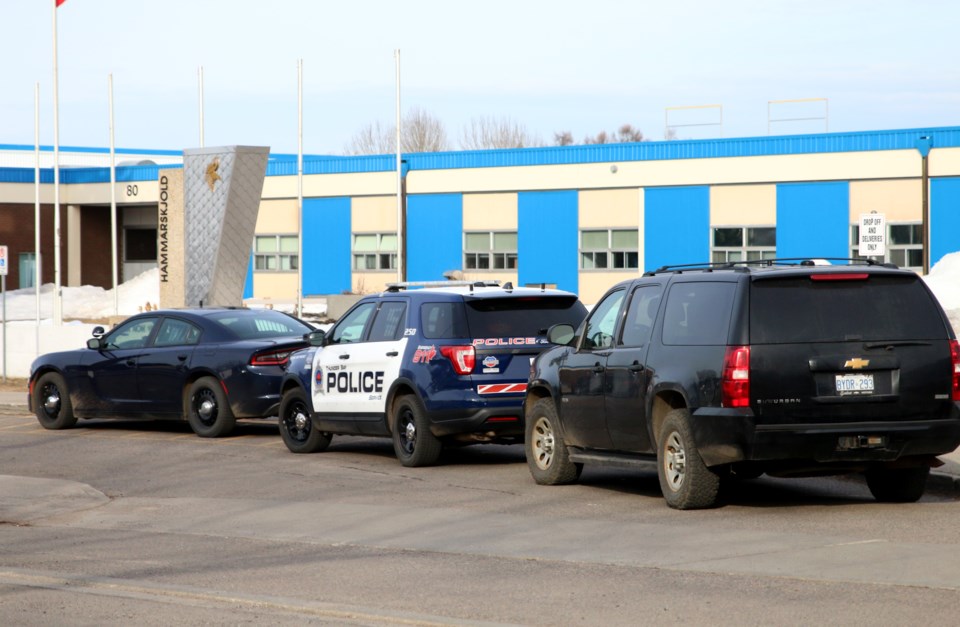 Thunder Bay Police Service units were parked outside Hammarskjold High School on Tuesday for the third time in less than a week after receiving an anonymous threat against the school.

THUNDER BAY – Police have released more details regarding the nature of the threats against Hammarskjold High School, which have closed the school six times this year.

An anonymous threat against Hammarskjold was received by police on Tuesday and the Lakehead Public School Board decided to close the school. Several other public schools in the area were placed under hold and secure. This is the sixth incident in 2019, with three occurring in February and three in the last week.

When asked if these threats are related, West said all the incidents are being investigated separately.

“With the tips coming in anonymously our investigators will follow up on all the information they have to try to determine where they are coming from and from whom,” he said.

The threats are received by police and not the school directly. When a threat is received, investigators contact the School Board, who then determines what actions to take.

Following the most recent threat on Tuesday, West said officers searched the school and surrounding grounds and did not find any evidence linked to the threats.

Each individual call of this nature can cost the Police Service thousands of dollars, but West said officers take these threats very seriously.

“We hope that by giving more information that it gives people peace of mind,” West said. “We are concerned for public and school safety.”

Frustration is mounting for students at Hammarskjold who say they just want to go to class but are greeted with the all too familiar sight of police cars parked outside of the school.

“Seeing as how this is the fifth or sixth time, to be honest, it’s nothing really new,” said Grade 10 student, Michael Nagy. “I don’t know who is doing this, but it’s quite aggravating. I still have to get quite a lot of work caught up on. I wish whoever is doing this would just stop.”

“This should be once in like 10 years max, but it is happening every other day,” Nagy continued. “I don’t know who is doing this, but they have a real problem.”

Students at Hammarskjold say they are stressed and starting to worry about what all these closures will mean for their school year.

“It’s messing up my school year,” said Grade 11 student, Makayla Bearman. “We are all really far behind and we are not getting to learn about things that I want to get to learn about.”

“Everything is really squished together and we are trying to fit a week’s worth of topics into like three days. Everyone is super stressed.”

Students have not been informed as to whether the school year will need to be extended to make up for the lost days, but if that is the case, it could be a challenge for international student like Sophie Bi.

“If it’s just one week, it will cause a lot of things for me, so I don’t want that to happen,” she said. “I already booked the flight.”

“The teachers are stressed about this,” Bi continued. “I think it is one more day like this where you need to expand the school days. It’s not going to be a good thing for us.”

Police continue to investigate the threats and have set up a special tip line at 684-5001 for any information that could assist in the investigation.

According to some students, there are rumours floating around the school about the situation, but no one seems to know who is responsible for these threats or why they are happening.

“There are people talking about it and saying that it’s dumb and whoever is doing it should just stop,” said Grade 9 student, Austin Kuczynski.

Missed school days and catching up on work aside, students say the fact that Hammarskjold is receiving these threats is also scary and the decision to close the school is the right one.

“It’s a little bit scary to come to school,” Bi said. “I really appreciate that everyone is taking it seriously, but it’s just too many times.”