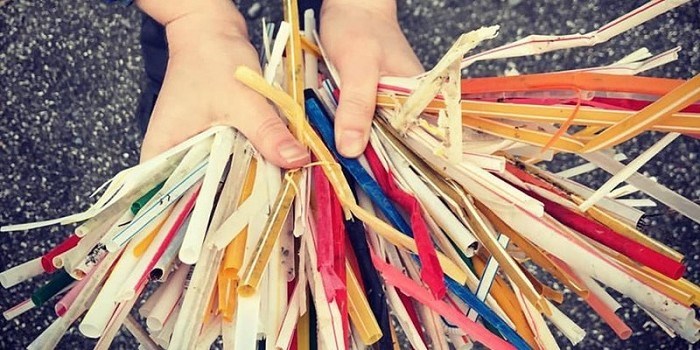 The Last Straw, an EcoSuperior project aimed at reducing the use of plastic straws in local restaurants. (http://www.ecosuperior.org/laststraw)

THUNDER BAY -- Water samples taken from Lake Superior show that the Thunder Bay area appears to have a significant amount of plastic pollutants.

The samples were collected in 2014 as part of a fish survey on Lake Superior by an American research team.

Kara Cox, a Thunder Bay-raised graduate student at the University of Waterloo, has analyzed the water from 188 different samples taken around the lake. She's found microplastics—defined as being smaller than 5 mm—in each and every sample.

Cox told tbnewswatch.com the samples were collected all over the lake, including shoreline sites and the middle of Lake Superior, but the highest concentration of microplastics tended to be in shoreline samples.

"The two sample locations with the highest plastic concentrations were actually just offshore of Thunder Bay," she said

"We expect larger population centres to produce more plastic, but there may also be some sort of current that's pushing plastic into this one area just outside of Thunder Bay."

The results were dramatically different, however, from water samples taken near Duluth-Superior, the other large population centre on Lake Superior.

She said the disparity between Thunder Bay and Duluth is one of the reasons pointing to the need for more research on Lake Superior, including the impact of currents.

Plastic straws are among the products that can break down into microplastics.

It's why EcoSuperior Environmental Programs and other groups are launching The Last Straw, a project aimed at reducing the use of plastic straws in local restaurants.

Costigan said alternatives to plastic straws include disposable paper straws as well as reusable options such as stainless steel and glass.

She said many people are aware of the growing problem of plastic pollution in the world's oceans, "but don't relate that to something that's happening here. There's over 10,000 tons of plastic that enter our Great Lakes system every year, a lot of it from single-use disposable plastic food service items, straws being one of them."

Noting that some early participants from the restaurant sector have committed to becoming more environmentally-friendly, Costigan said "We want to help other establishments do the same thing by spreading the knowledge and making that step easier for them."

The project is funded in part by the City of Thunder Bay and the Ontario and federal governments.