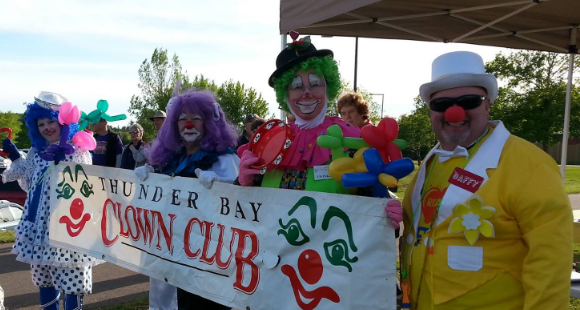 THUNDER BAY - Movie-goers at Thunder Bay's Silver City can expect to run into the benevolent version of clowns when they arrive Thursday to take in the new motion picture It.

Members of the Thunder Bay Clown Club plan to be outside the theatre, in costume, to show the public what club president Dan "Daffy" Baxter describes as "the differences between professional clowns and clowns depicted as monsters and villains in film and media."

It is based on Stephen King's novel in which a central character is Pennywise, a murderous clown.

Baxter says he and some other members of the clown club will gather in front of Silver City for an information session before the first showing at 6 p.m., to counteract the negative image this kind of movie creates.

"Our presence there is not to protest the movie or to deter viewers," he said. "We just wanna be there to present the positive image of clowns, so that young people aren't scared. They see these movies, and that's not clowns are really about."

Baxter said children and adults alike need to know about the good work professional clowns do in the community. "We're out there doing fundraisers and events, face-painting, doing balloon animals, glitter tattoos, and it's all about clean, healthy fun."

The local clowns will hand out information leaflets and balloons but, Baxter emphasized that they want people to "go and enjoy the movies" no matter what they want to see. "I hope the movie is a success," he added.

Asked if he plans to buy a ticket for It himself, he said he's not a fan of the horror genre but he expects other members of the club will see it at some point.

The Thunder Bay Clown Club has about 20 members.