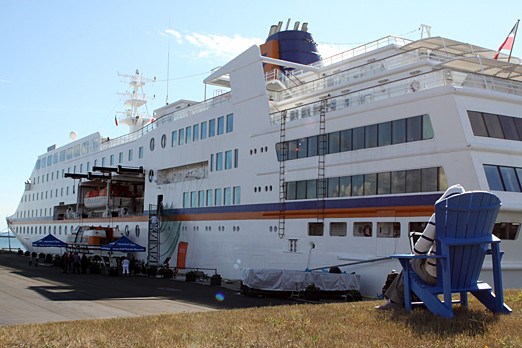 The MS Columbus brought passengers to the Pool 6 docks in 2011. The facility hasn't seen cruise activity since 2013. (File photo)

The city will spend up to $100,000 for landscaping and a third-party engineering assessment of the facility, which hasn't seen a cruise ship visit since 2013.

Cruise ship visits already tentatively confirmed with the CEDC could generate a local economic impact of over $20 million between 2022 and 2024, and support dozens of jobs, he told councillors.

The city's report did not include details on how the estimates were calculated. Tbnewswatch has requested further details from the CEDC.

Three cruise lines have confirmed their interest to dock at Prince Arthur’s Landing starting in 2022, when a federal ban on cruise ships with over 100 passengers is set to expire on Feb. 28.

Viking Cruises plans to send its newest vessel, the Octantis, from Milwaukee to Thunder Bay seven times next year. The 378-passenger boat will be the largest passenger vessel the Great Lakes has ever seen.

Thunder Bay will be used as a turnaround point, with disembarking passengers returning home by air, and a new group flying into the city to embark. That’s expected to bring up to 5,200 people through the city per year, with most staying at least one night in a local hotel. The vessel is expected to be in port for about 48 hours on each visit.

Two other companies, Victory Cruise Line Vessels and Hapag Lloyd Cruises, have also expressed plans to visit Thunder Bay next year. The CEDC has three cruise operators with confirmed stops through 2024, Zakrewski said, and is in discussions with another eight or more lines.

“Tourism Thunder Bay and the CEDC will be aggressively marketing to every single person that's getting on or off of that boat to come stay, play, and spend,” he said.

Coun. Shelby Ch’ng expressed some skepticism of the rosy outlook presented Monday, pointing out past forecasts hadn’t always panned out.

“We got excited before, and now it’s just kind of an annual tradition – we announce ships are coming, but there’s nothing in the water,” she told Zakrewski. “I’m hoping this time with you at the helm, we can get this done finally.”

The CEDC head, who assumed the role in 2019, said companies had invested significant time and expense working Thunder Bay into their itineraries, while acknowledging there was no binding agreement to follow through.

“I do have some faith this is going to happen,” he said. “I can’t guarantee they won’t change their plans by next year... The fact we have three cruise lines committed starting next year, and three the year after, I think that’s about as positive an indication as I can offer.”

Zakrewski also pointed to estimates that cruise activity would support 50 to 75 local full-time jobs in 2022. By 2024, he said that figure could approach 100.

Coun. Aldo Ruberto said the good news should be celebrated, with plans appearing more solid than in the past. Given the estimated economic benefits, he said funding for the dock upgrades was a no-brainer.

“If you have to think three or four times about this, there’s something wrong,” he said.

Coun. Andrew Foulds shared that excitement, but pressed staff on whether the changes would impede public access to the waterfront (only during embarkation and disembarkation, Zakrewski said) and whether Fort William First Nation was being involved in the plans.

The motion passed by council will see Professional Engineering Services retained to assess the Pool 6 dock for compliance with requirements including water depths.

The city had not ruled out that assessment could "determine significant work is required,” a report from its infrastructure and operations department noted.

It spent between $6,000 and $17,000 a year for security, grounds maintenance, and contracting services for cultural organizations to welcome passengers ashore when it last hosted cruise ships visits from 2010 to 2013, the reported said.

Councillors also approved a mutually-agreed transfer of Pool 6 operations from the CEDC to the City, which will assume responsibility for scheduling, agreements, maintenance, and access to the dock.

It also established user fees for cruise lines at $0.02835 per gross tonne per day, along with a passenger fee of $4 per person. The city hadn’t previously charged fees “due to the property being largely undeveloped and to act as an economic stimulant.”

The Pool 6 motion was passed unanimously, with councillors Hamilton and Giertuga absent.