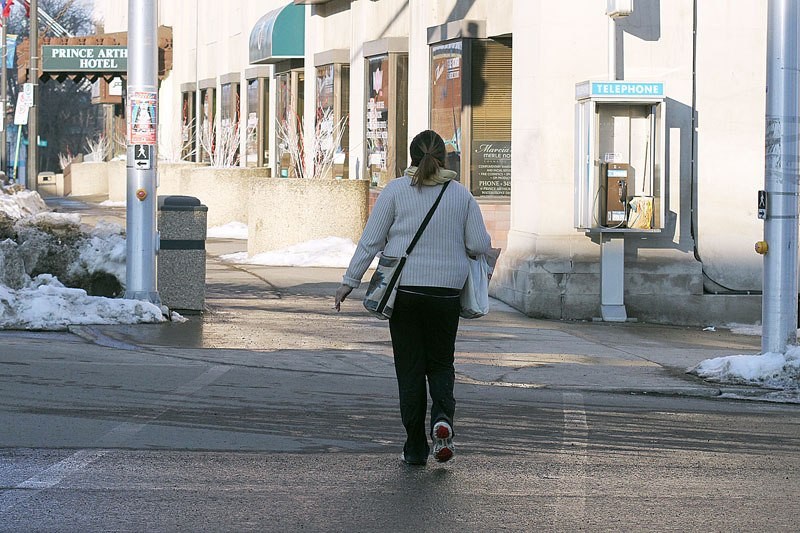 A woman walks along the city's north core downtown Monday afternoon. New data from Statistics Canada shows that Thunder Bay is one of the most dangerous cities in Canada for women. (Leith Dunick, tbnewswatch.com)

In 2011, Thunder Bay was the most dangerous city in Canada for women.

According to police-reported violence figures released Monday by Statistics Canada, women in the city were assaulted or attacked at a rate of 1,905 times per 100,000 people, higher than any other census metropolitan area in the nation. The rate represents 992 actual incidents

Men fared little better in the report, with 1,507 incidents per 100,000, third highest in Canada behind Saskatoon and Kelowna, B.C.

Debbie Zweep, executive director of Faye Peterson Transition House, said it’s a disturbing trend, but not a surprising one.

“About 680 of every 1,000 police calls here in Thunder Bay are domestic calls, so this would fit with it,” Zweep said in an interview with Thunder Bay Television.

It’s also probably a lot worse than the statistics let on.

“The other thing we know from Faye Peterson is that only about five to 10 per cent of the women we work with actually call police.”

“They are absolutely reflective of our experience here in Thunder Bay,” Zweep said.

Zweep added that she has spoken to police, who plan to investigate domestics differently than in the past. It’s something she hopes moves forward, and fast.

“We need to look at it and ask why do we have such a high incidence of domestics going on in this city. There are lots of reasons for that, lots of poverty, lots of substance use, lots of marginalization of people. Certainly those are underlying conditions that present for domestics."

"The answer is not more police resources, rather an intelligent community response to stop domestic violence before it happens. The arrest and charging of a spouse or partner may stop the immediate threat, but without deploying community resources to address causation, safety planning and family support, the violence often repeats and in some cases escalates," Hay said in an email response.

Hay added police are working on a strategy to improve both the training and and experience for officers responding to domestic violence calls in the city in the former of a first-respoonse domestic violence unit. Police have also started talks with partner agencies, including both Faye Peterson and Nishnawbe Aski Nation Legal Services to develop "a co-ordinated response from all community partners involved serving victim families."

"It is important that all partners fully understand and appreciate the roles and responsibilities of each organization to ensure an effective and efficient response that will minimize duplication/gaps in service to victims. It is hoped that cross-training of all agencies will strengthen the support mechanisms in place for domestic violence victims," Hay said.

Zweep added that a group of people working at a variety of different agencies targeting violence against women have come together to combat the problem in a number of different ways.

They plan to present a deputation to city council outlining the issues at some point in March.

“Certainly we’re looking at having some input with regards to the police and maybe helping them with some training around specifically risk assessment. What are they seeing, where does it fall in the risk categories?

“I think reports like this just really give the public full awareness, the full information that this is a really big issue in Thunder Bay and there are things we should be doing about it.”