Walking with our Sisters hosts community discussion to address safety

THUNDER BAY -- Mel Legarde knows it will take a lot of involvement from all areas of the community to eliminate violence against women and girls.
Mar 8, 2015 5:41 PM By: TbNewsWatch.com Staff 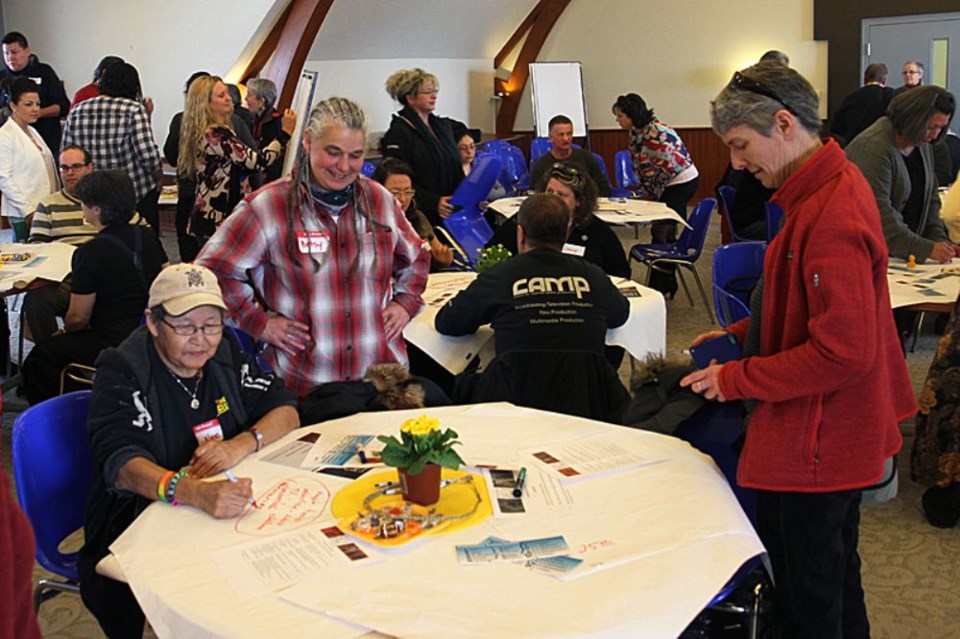 Participants work during a discussion hosted by Walking with Our Sisters on Sunday to create ideas on improving community safety. (Matt Vis, tbnewswatch.com)

THUNDER BAY -- Mel Legarde knows it will take a lot of involvement from all areas of the community to eliminate violence against women and girls.

Legarde was one of more than 50 people who gathered at the Lakehead University Faculty of Law on Sunday for a community discussion hosted by the local Walking with Our Sisters committee on how to enhance community safety.

Expanding the scope of the problem is the first step in being able to develop the required complex solutions.

“The idea of having support is really deep because you want men to get involved,” he said.

“This isn’t just a women’s issue. This is a men’s issue, a family issue and a community issue.”

The session, which lasted more than three hours, was the fourth that has been hosted by the organization.

Leanna Marshall, local chair of the Walking with Our Sisters, said there has already been considerable progress from the first community discussion.

“It gives me a lot of hope. There are some amazing people in the room with some really great ideas that are being generated right now,” Marshall said.

“It means a lot because when the committee came together we intentionally chose not to choose a theme because we wanted the community to choose what was important. For them to say what’s important to them and to hear the conversations that are coming out of it is phenomenal.”

Marshall pointed to incidents of attempted abductions and cases of domestic violence as proof more work is required.

However, with more conversation there becomes more of an understanding of what is working and what needs to change.

“There are a lot of commonalities around education, public awareness and how can we get more men involved and engaged,” Marshall said.

“The other theme is around self-responsibility and having people ask what their responsibility is and what they can do to make a difference.”

She will be providing a deputation before city council on Monday to seek to include support for contributing factors to the number of missing and murdered indigenous women. Couns. Rebecca Johnson, Paul Pugh and Aldo Ruberto participated in Sunday’s discussion.

Kara Louttit said community safety can be achieved by creating inclusiveness and not having people feel like they’re on the outside.

In addition to the city councilors, the discussion was also attended by Fort William First Nation Chief Georjann Morriseau and multiple members of the Thunder Bay Police Service.