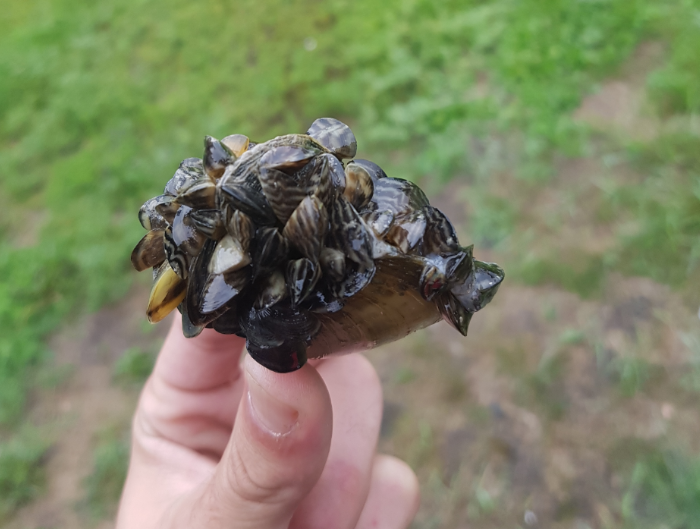 A biologist with the Ministry of Natural Resources and Forestry says the recent confirmation of zebra mussels in Nipigon Bay was not "a huge surprise."

The invasive species was previously identified in Thunder Bay harbour, where it's believed to have been carried by a visiting ship.

Jeff Brinsmead, the MNRF's senior invasive species biologist, said it would be a much bigger surprise if zebra mussels turned up in other inland waters of northwestern Ontario.

"Generally I wouldn't expect them to do very well. They need a fairly high level of dissolved calcium in the water to form their shells. Much of the Canadian Shield is relatively calcium-poor."  In an interview with Tbnewswatch.com, Brinsmead said that means their survival rate in these waters would be very low.

He was fishing recently around the mouth of the Nipigon River when he hooked a freshwater clam on his downrigger in about 30 feet of water.

"Something didn't look right on it, so I started looking more closely, and there were all these zebra mussels. I've seen them on TV, so I brought it over to the MNR so that everybody could see that they are here, and to keep them out of the other lakes," Clearwater said.

The ministry confirmed they were zebra mussels.

Clearwater said there had been talk of previous sightings in Nipigon Bay but they were never verified.

"I'm pretty worried because our family has a camp outside Lake Helen (part of the Nipigon River system) at Polly Lake, and everything's connected. It's a big family lake. Everybody plays, swims...and those things are known to be pretty sharp and dangerous."

Brinsmead noted that even though it's unlikely they will spread to other lakes, "There are certain lakes on the Shield that will have higher calcium levels, for whatever reason. Maybe they have an outcropping of limestone rock within the lake which could result in higher calcium levels."

Compared with the other Great Lakes, the population of zebra mussels in Lake Superior—where the water is colder and lacks some nutrients—is more sporadic and less dense. Brinsmead said it's more probable that they can survive in shallower bays along the shoreline.

But he said it's still advisable for anglers coming off Superior to clean their boats and drain their livewells to reduce the risk of spreading any kind of invasive species to other waterbodies.

Brinsmead also encourages people spotting a suspected zebra mussel or other invasive species to report it through Ontario's invading species hotline at 1-800-563-7711.

Clearwater said his discovery has been noted in Nipigon's angling community, and he's hearing people say things such as "Wow, maybe I should start cleaning my boat."

Others, he said, are recalling having possibly encountered zebra mussels in the past, and regretting now that they didn't think to bring them in or report them to the MNRF.