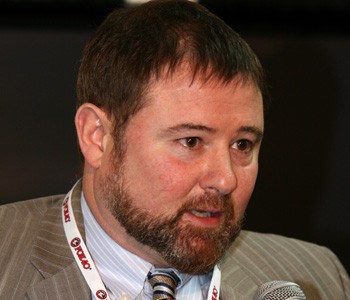 The X-Men players and coaches were nowhere in sight at the media gathering, vanquished as they were in the Atlantic University Sport final by the returning Saint Mary’s Huskies.

No, the Antigonish, N.S. school was given props for knocking off the defending champion University of New Brunswick in Round 2 of the AUS playoffs, sweeping a team that went 27-1 in the regular season and looked as sure a bet to repeat as any team in recent Canadian university hockey history.

"I think as much as I can thank everybody here, I think we can all thank St. FX," said Saint Mary’s coach Trevor Stienburg as the packed media room at the Fort William Curling Club broke out in hearty laughter.

With the Varsity Reds slammed to the sidelines, it’s anybody’s game at the six-team tournament, Stienburg added.

"I believe all six teams have a chance to win. It’s the closest it’s been for a long, long time," said Alberta coach Eric Thurston, who led the Golden Bears to national titles in 2006 and 2008, and are seeded at the top of the pile for a second straight year after capturing yet another Canada West crown with a to-the-limit best-of-three final series win over Manitoba.

Rookie Lakehead coach Joel Scherban, who played in two national championships during a storied five-year career with the Thunderwolves between 2001 and 2006, said top to bottom it’s hard to differentiate between the six teams in the tournament.

"We believe that all six teams are capable of winning and the team that plays the best and has a little bit of luck is going to win the tournament," Scherban said.

For some it’s a matter of unfinished business.

Rancourt, in his final season with the Huskies, wants nothing more than to make amends for a five-goal meltdown against Western in their second round-robin appearance last year, a period that cost them a shot at a national title.

"We kind of ended things on a sour note last year. That obviously wasn’t how we wanted to end our season. So to get another chance at it here is certainly exciting and hopefully we’re able to take more advantage of the opportunity."

Experience should be a factor, Rancourt added, though four of the six teams, excluding Manitoba and UQTR, were in Thunder Bay in 2009.

"I hope it does a lot," said Rancourt, the second-leading point-getter in AUS men’s hockey with 41 points. "Certainly being around our team there’s a different mindset right now. We’re a lot more focused then we were last year. And certainly the guys who were here last year have taken that experience and learned from it. It should be fun."

Lakehead defenceman and captain Jordan Smith said the key is to avoid the hype and just concentrate on what you have to do to be successful.

It’s not easy though, he added.

"You can sort of feel the excitement in our practices. There’s a lot of jump right now. I don’t think we’re really feeling the hype. This is our second year in a row hosting. The majority of our team was here last year, so we know what to expect," Smith said.

The tournament kicks off on Thursday afternoon at 2 p.m. when Manitoba and McGill meet in the Pool B opener. UQTR and Alberta tangle in Thursday’s evening tilt, with the loser playing Lakehead on Friday night.