Benching for the cure

A local strongman saw a lack of strength competitions in the area as a sign to do something about it. Ben Thompson, 20, organized the event with friends from the health services program at Confederation College.
0
Mar 7, 2010 2:50 PM By: Jeff Labine 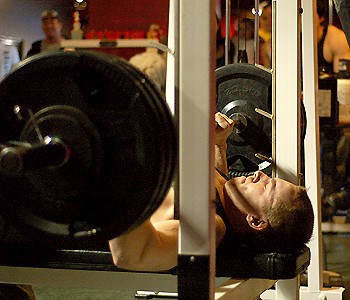 Dan Skaarup, 28, bench presses 330 pounds for the Benching for the Cure competition on Sunday. (By Jeff Labine, tbnewswatch.com)

A local strongman saw a lack of strength competitions in the area as a sign to do something about it.

Ben Thompson, 20, organized the event with friends from the health services program at Confederation College. Thompson said he wanted to show off the strength of local athletes and decided a competition was the best way to do it.

The weightlifting competition had 17 participants bench pressing and dead lifting at the South Side Fitness Centre on Sunday.

Participants paid an entrance fee of $10 and competed in different categories divided by weight and the amount lifted. Money raised from the entrance fee and donations goes to the Canadian Cancer Society and George Jeffrey Children’s Centre.

Thompson said he wanted to raise money for the Cancer Society in support of weightlifters with cancer.

"I thought that was really a tragedy," Thompson said. "Any money that can be put towards find a cure would be beneficial and same with George Jeffrey… just money going towards a good cause."

The range of competitors ranged from amateurs to professionals. Kyle Rayner, 21, became a professional strongman after he showed what he could do at the Ontario’s Strongest Man competition last year. He finished 18th out of 25 competitors.

Rayner started lifting weights when he played football at St. Patrick High School. He competed in a strongman competition in 2008 and from there, he decided to keep getting stronger. He said he hopes one day to go to the Canadian Strongest Man competition.

"Last year I decided to step it up and play with the big boys," Rayner said. "I figured instead of doing amateur competitions I’d rather be a small fish in a big pond. I feel like I’m getting some where."

Rayner said he had a goal to bench press more than 400 pounds and dead lift 600 pounds. When Raynard lifts the weight, he said all the pressure is on him. He said he is competing against himself and only he can lift it.

Rayner worked with newcomer Ryan Gregnol, 26, to get him stronger. Gregnol tore his chest last week and didn’t participate in the bench pressing part of the competition but decided to do the dead lift with a goal to lift 600 pounds.

Gregnol started lifting weights to strengthen his golf game. He competes in long drive events and to hit the ball harder he said he decided to lift some weights.

"Lift more and hit the ball further is pretty much how I looked at it," Gregnol said. "I got to be friends with the guys and they got me to go out and lift with them."

Gregnol said he didn’t feel intimidated when he first started lifting weights. He did it for his own numbers, he said.

"It’s you against the weight really…you’re not competing against anyone else really," he said.