Matt Caria has been handed a two-game suspension for a racial slur aimed at Western’s Yashar Farmanara.
0
Jan 24, 2012 4:18 PM By: Leith Dunick 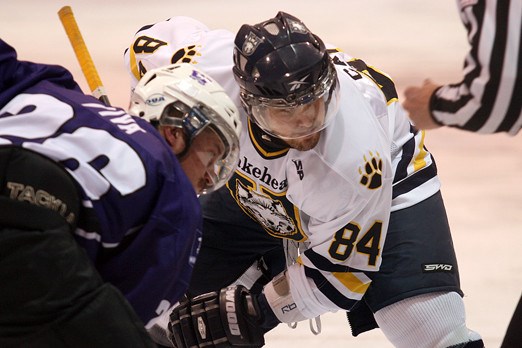 Matt Caria has been handed a two-game suspension for a racial slur aimed at Western’s Yashar Farmanara.

Caria, who leads the Lakehead Thunderwolves with 24 points in 17 games, was kicked out of Saturday’s 1-0 loss to the Mustangs after skating past the Western bench and having words with Farmanara, who is of Middle Eastern descent. The two were teammates on last year's University Games team.

Lakehead athletic director Tom Warden on Tuesday said the suspension was agreed to upon by the school, Ontario University Athletics and officials at Western.

“Incidents like this we obviously take very seriously,” Warden said, reached by phone. “It is our goal to deal with them swiftly and expediently. Matthew has been suspended for two games … and he has been asked to apologize to the player in question.

Caria, 23, is a native of Sault Ste. Marie and in his third season in a Thunderwolves uniform. He leads the team, which dropped out of the top 10 national rankings on Tuesday, with 74 penalty minutes.

Warden said it’s completely out of Caria’s character to utter a racial slur. Warden wouldn’t say what it was Caria said to Farmanara.

“Matthew understands completely what he’s done is wrong … He feels awful. He understands that the student athlete’s role is to be a leader and he understands that as a role model and a leader that it’s not behaviour that’s acceptable,” Warden said.
“He more than accepts the punishment.”

Lakehead coach Joel Scherban, contacted for reaction, would not comment, deferring the matter to Warden.