A bit of wind and a wild pitch kept the Border Cats at the bottom of their division Thursday night.
Jul 15, 2010 10:30 PM By: Jamie Smith 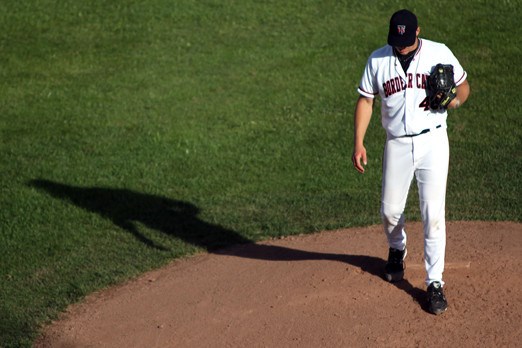 A bit of wind and a wild pitch kept the Border Cats at the bottom of their division Thursday night.

Despite out-hitting the Brainerd Lakes Area Lunkers (5-2), the Cats (2-5) lost 3-1 to the North division leaders, putting the struggling team on a three-game losing streak.

Border Cats starting pitcher Michael Woytek (2-3), who took the loss, said he came out strong and wanted to pitch for as long as possible Thursday after two rough starts in Alexandria against the Beetles. While he only gave up two hits, shutting the Lunkers out for five of the seven innings he pitched, the first hit off Woytek was David Albritton’s first homerun of the season.

A slow-flying two-run shot to the left field scoreboard, Woytek said the ball wouldn’t have made it out of the park most days. But on Thursday evening it did and the Cats watched as the Lunkers took an early 2-0 lead.

"The wind was blowing off to the left. You know, any other day I think that’s a routine pop fly," Woytek said. "It barely got out of here."

After the second inning Albritton homerun, Woytek would only see nine batters through the next three innings.

Facing two runners on base and only one out, Woytek shutdown the Lunkers offence in the sixth to keep the score low. Border Cats manager Mike Steed said Woytek pitched a great game and did exactly what the team needed him to do after exhausting their bullpen for two days in Alexandria.

"He got us to where we needed to be with what he had tonight," said Steed. "To come out the way they did defensively on the mound is exactly what we needed."

A single by Ken Battison in the fifth brought Evan Mistich sliding into home plate for the Cats’ lone run of the game. Woytek said despite a solid defensive showing, his team just couldn’t get it together offensively.

"I’m not one to beg for the team to score. If we score one run my job is to shut them down and throw goose eggs," Woytek said. "Early on when I gave up the two-run home run I just thought ‘just keep shutting them down and our team’s going to get back in it’ I did that but unfortunately things just didn’t go our way."

"He worked very fast on our hitters today…put our guys in the defensive position," Steed said. "He had a slider tonight that he didn’t have the last time we saw him so I think that was the difference in the game right there."

Cats reliever Zak Miller gave up a triple to Brainerd’s Tommy Reyes in the eighth. A wild pitch from Miller brought Reyes to the plate to conclude Thursday evening’s scoring.

Steed said although the team has lost three in a row, they face Brainerd again Friday before Alexandria comes to town. With those teams leading the division, Steed said a few wins could bring the Cats right back to the top.

Woytek agreed saying the whole team has been talking about the next three games.

"We’ve kind of been snake-bitten lately," Wotyek said. "We know we can do it and hope to get it done."