Chill warms up for season

Veteran players of a local soccer team welcomed a few new faces to the roster in order to help bring the championship back home to Thunder Bay.
May 9, 2010 12:08 PM By: Jeff Labine 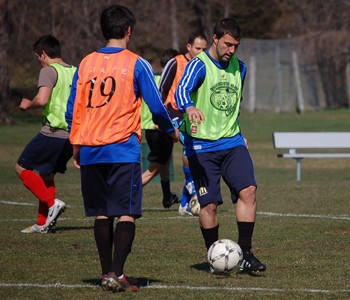 Nolan Intermoia, 25, receives a pass at the Thunder Bay Chill soccer training camp on Sunday. (Jeff Labine, tbnewswatch.com)
Veteran players of a local soccer team welcomed a few new faces to the roster in order to help bring the championship back home to Thunder Bay.

Abascal, 23, played in California before he signed with the Chill, saying he agreed to come north of the border after getting a recruiting call from team officials.

"It was a great opportunity," Abascal said. "I just graduated and I wanted to take my soccer to the next level. We have different ethnicities out here and everyone is going to bring something different. I just want to give my best and help my teammates."

Originally from Guatemala, Abascal said he traveled once to Toronto but other than that never spent much time in Canada. He said he likes any place where he gets to play soccer.

Co-captain Nolan Intermoia, 25, returns for his fourth season with the Chill and said he started getting acquainted with the new players after picking them up at the airport. He said it’s important that the team starts to bond before stepping onto the field.

"It’s important to start meshing off the field," Intermoia said. "You start liking each other and start knowing each other’s habits. When we are on the field for the first time we’re all having a laugh and having a good time and makes the practices more enjoyable."

Gustavo Oliveira also returned after taking a year off to mend an ankle injury. Oliveira returns with former strike partner Brandon Swartzendruber to reform one of the most potent up-front tandems in the PDL.

Intermoia said he felt excited after he heard Oliveira and Swartzendruber had signed back on with the Chill.

"Hearing that Oliveira is coming back makes your stomach feel a little better this season," he said.

Tony Colistro, head coach with the Thunder Bay Chill, said he always has high expectations and hoped the team goes all the way to the championship. He said he recruits to have a winning and this year is no exception.

"We’ve put the tools in place," Colistro said. "The next three weeks are going to be important to us with our training and bringing our players together."

The Chill won the PDL Championship back in 2008. Colistro said the team is in a good position to reclaim the championship this year.