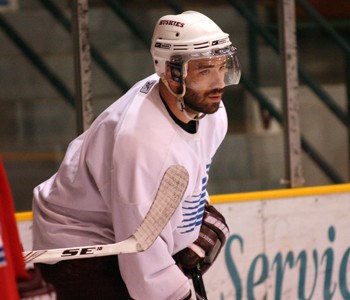 Mike Danton. (Leith Dunick, tbnewswatch.com)
Mike Danton just wants to be one of the guys.

Danton, the former NHLer who spent five years in prison for conspiracy to commit murder, has found refuge at Saint Mary’s University in Halifax, whose hockey team took him in and gave him a second chance at the game that gave him so much, but eventually took it all away.

Sporting a scruffy, dark playoff beard and a shaved head, the 29-year-old is trying his best to keep his eyes on the future, not on the past, which saw him arrested on June 16, 2004, charged and ultimately found guilty of trying to hire a hit man to kill his agent David Frost.

Last fall Danton, seeking his release from prison from the National Parole Board last fall, said the target was not Frost, but actually his estranged father, Steve Jefferson.

On Wednesday, just before the Saint Mary’s took to the ice at Thunder Bay’s Fort William Gardens, the Brampton, Ont. native and former St. Louis Blue and New Jersey Devil, said he just wants to get on with his education and do whatever it takes to help his Huskies capture their first national men’s university hockey championship.

The adjustment from prison life – where he spent more than five years – to the real world has been a good one, Danton said.

"The guys have made it a lot easier for me. I’ve said so many times throughout the process, it’s the best group of guys I’ve ever played with. They’ve made the transition real easy. The group is really close-knit and for once in my life I’m having fun playing hockey."

A speedy grinder who checks in at just 5-foot-9, Danton made it clear he wouldn’t talk about his time behind bars, Frost or his father.

Those questions have been asked and answered, he said.

What he would talk about was his reintegration into the game, which didn’t go quite as smoothly as he might have hoped

"I think the time off has proven to be a little bit challenging, but I’m not really disappointed where I am, I’m just not where I’d like to be," said Danton, admitting his skating and timing have been off since he made his Huskies debut on Jan. 27.

He did pour it on the playoffs, scoring six goals and adding three assists in nine games, as Saint Mary’s disposed of Moncton, Acadia and St. Francis Xavier, winning eight against just one loss.

Perhaps he’s getting more comfortable on the outside, back in familiar territory on the ice, the camaraderie of the locker room, and a role model who will lead him down the That role model for now appears to be Saint Mary’s coach Trevor Stienburg, himself a former NHLer who spent time in the show with the Quebec Nordiques.

Danton is living with Stienburg and his family, and the coach had to laugh when asked if he’s found himself sheltering his new recruit from incessant media demands and other unwanted attention.

"Yeah, I’m sheltering him. I’m feeding him (too)," Stienburg chuckled. "Yeah at first there was (attention), but he’s just another Joe on campus. He really is. Maritimers might be a little bit different. It was all fired up at first, but it settled down and he’s just a regular guy that gets shaving cream in his pockets at practice.

"And he’s just a regular guy on campus that people just say, ‘Hey Mike, how’s it going?’ So it’s pretty comfortable for him right now."

New teammate Marc Rancourt said Danton hasn’t skipped a beat in the locker room, where he was welcomed with open arms by a team that made nationals the year before and is looking for every advantage this time around.

"He’s somebody who’s played at the best level possible. He has a lot of experience there. He’s brought a new look of intensity, he’s brought some hard work to our practices, which has translated over into the games," Rancourt said.

"He’s certainly been instrumental in getting us here and getting our team walking and behaving as pros."
Rancourt added Danton has fit right in and is just one of the guys since Day 1.

"I’m sure if you asked him he’s probably taking a little bit of razzing on the ice, but that’s part of the game, that’s to be expected and he’s reacted accordingly."

Like everyone else on the Huskies roster, Danton has one goal this weekend, hoisting the University Cup and delivering the school’s first national hockey title yet.

His time away from the game makes him appreciate the moment that much more, he said.

"Maybe to somebody whose gone from a higher level and come back down to this level and hasn’t missed any time it wouldn’t mean as much, but for me, winning a championship, especially with the group of guys we have on this team would be phenomenal."

Saint Mary’s plays its first game on Friday afternoon, against the loser of Thursday’s McGill-Manitoba match-up.