Eyes on the prize

Four years ago Dan Speer and Shandor Alphonso were wide-eyed rookies, along for the ride as the Lakehead Thunderwolves came within a goal of a national championship.
0
Mar 9, 2010 10:36 AM By: Leith Dunick 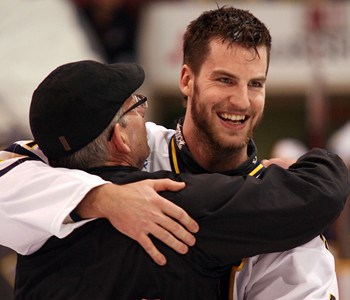 Four years ago Dan Speer and Shandor Alphonso were wide-eyed rookies, along for the ride as the Lakehead Thunderwolves came within a goal of a national championship.

Today they’re the last remaining members of that squad, the sole Queen’s Cup title the team has won in its brief nine-year existence.

On Saturday Speer and Alphonso will have a chance to repeat history, when the McGill Redmen come to town for a one-game showdown for the right to call themselves OUA champions.

It’s a scenario both players thought they’d live out a little more frequently during their five-year term with the Thunderwolves.

"It definitely feels pretty good," said Speer on Tuesday morning, three days after the team scored five unanswered goals in a 5-2 victory that ousted Western from the OUA playoffs in two straight. "In five years I’ve done it twice only. Even the other thing, with nationals, we were really lucky we were to host it. You take for granted how difficult it is in leagues like the Ontario Hockey League and CIS to get to the national championship."

Like Speer, Alphonso will be playing his final OUA contest on Saturday – though he’ll have at least two more games on home ice during the Cavendish University Cup later this month.

The moment isn’t lost on the Orangeville, Ont. native.

"We were there my first year, and maybe we thought it was going to happen a couple of times, but it didn’t. It feels so good to be going on with this group of guys, a great group of guys," said Alphonso, who has five points in seven playoff games in 2010.

Winning this weekend has more than just banner-hanging implications. In all likelihood the Wolves are playing for the No. 1 or No. 2 seed at the four-day Cavendish University Cup.

But, Speer said, it’s their way of putting a stamp on their season and proving their host spot is more than just a courtesy invite, which appeared to be the case in 2009. That year the Wolves lost out in the second round of the playoffs and waited around for more than a month for the national championship to begin.

"We had the mentality of going through the front door. And winning the Queen’s Cup is something that we’ve always had a goal to do. I think if we do that, we come in and represent Ontario and feel a lot better going into the tournament," Speer said. "The seeding or not, I think just with that push that we’re champions already, when you hold that, it just pushes you to play better."

Alphonso, who has emerged as one of the leaders on a team filled with them, said there’s not really a lot that he and Speer can tell their teammates at this stage of the season.

"(I’d tell them) just to keep playing the way that they’re playing. We’re here for a reason. We’ve been playing well of late, and not to change anything. If we play the same way we played against Guelph and against Western, we’ll be fine," Alphonso said.

Rookie coach Joel Scherban said he’s challenging his troops to approach the game like any other. He said he doesn’t want his team to get too high in the lead-up to McGill, a team that will bring two of the top offensive talents in the nation to Fort William Gardens, in OUA leading playoff scorer Francis Verreault-Paul, and Alexandre Picard Hooper, who with 13 points is just one behind his teammate.

Scherban, however, isn’t worrying too much about what a win or a loss might mean.
"The seeding is not too important to us. We’ve got the six top teams in the country, and you’re going to have to be playing at your best, so it doesn’t really matter who you’re playing in the pools. We’re going to work hard and hopefully win this weekend, and the seedings will take care of themselves."

Claw marks: Four of the six berths at the Cavendish University Cup have been filled. In addition to Lakehead and McGill, Alberta and Manitoba have qualified and will be representing Canada West.

Alberta swept Calgary in a best-of-three semifinal, while Manitoba upset Saskatchewan in three, breaking an eight-year streak Alberta and Saskatchewan had playing each other for the league title … In the east, Saint Mary’s is looking for a return trip to Thunder Bay, taking on upstart St. FX for the lone AUS spot.

Saint Mary’s made national news earlier this season, signing former NHLer Mike Danton, who spent five years in jail on conspiracy to commit murder charges. The other spot will also be decided Saturday night when Western plays the University of Quebec at Trois Rivieres Patriotes for the final OUA berth